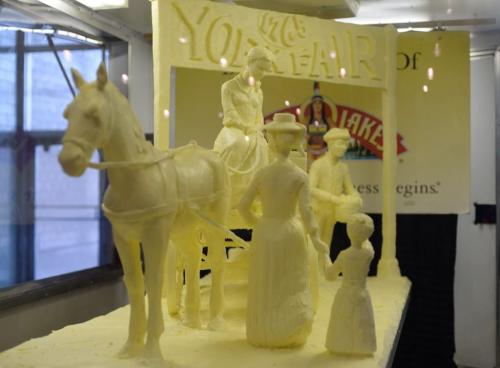 The historic York Fair is drawing on that history in its 2014 butter sculpture. The 250th anniversary of the fair comes in 2015, but this artwork is a forerunner of that anniversary. ‘This is a prelude to next year,’ Jim Victor, one of the sculptors, said at the unveiling Thursday night. ‘Next year will be an update.’ The sculture, by the way, is formed from 300 pounds of Land O Lakes Butter. To be precise, the fair hasn’t been continuous since 1765. For about 30 years after 1815, the there was no fair, after a man was killed in 1815. Perhaps the early years of the fair made up for this gap. When the Centre Square fair was approved by the Penn Proprietors in 1765, they allowed for twice-a-year events.  The York Fair, 2014 edition, opens today. (See video of the unveiling below). Also of interest: How the York Fair looked from the air in 1932, Part II.

The unveiling of the butter sculpture.

Other York Fair stuff from all over … .

All the news: All the York Daily Record/Sunday News York Fair coverage  – and there will be a lot of it – will appear on this YDR.com site.

Checking your knowledge: This York Fair quiz will check out what you know about this historical event.

Early fairgrounds: Yorkblogger Stephen H. Smith shows the location of the York Fairgrounds in the 1800s, before it moved to its current location in 1888. He overlays it with a current map. Interesting stuff.