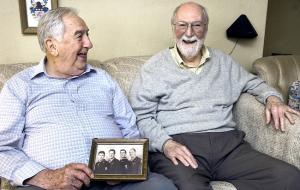 Dean, left, and Paul Daugherty sit are two of four brothers who fought in World War II — Dean, Paul, Charles and Donald . The original pictured was taken in 1946.

‘After he was captured by the enemy, Paul Daugherty was starved to the point that his already thin frame dropped 50 pounds. He said he was lucky to bathe once every six weeks and had no communication with his family back home. But despite the personal price he paid to defend his country, Daugherty said he’ll honor other veterans Thursday on Veterans Day. “Especially the guys from Korea and Vietnam,” he said and added that those veterans weren’t welcomed home the way he was after World War II. “And some of them are still suffering from that treatment.” ‘ So began a recent York, Pa., Daily Record/Sunday News story about a band of York County, Pa., brothers who served in World War II. Enjoy the story: Brothers, among four who served in WWII, tell their tale Also of interest: World War II in York County, by the numbers, York County historical war deaths top 1,000 and York County’s World War II sacrifices …. part last.

Neat stuff from all over … .
Eric Lowe, an astute observer of the York County scene, raises an interesting question in a Nov. 10 e-mail about the location of an artifact: … .

Today is the birthday of the U.S. Marine Corps. My brother was in the
Marines in Vietnam. He told me a story. On Kings Mill road just west of
the RR tracks on the south side of the street is a building. I think
it’s a bar called Ultraviolet or something. At one time this housed the
Marine Corps club. In there was a building stone from the Tun Tavern
where the Corps was first organized in Philadelphia. He said he always
wondered what became of that stone after they moved out.

If anyone knows, comment below or contact Eric.
Recommended event: Public release of the York County Heritage Trust’s newly published book “Millers’ Tales: the Mills of York County.” is set for 1:30 p.m., Saturday, Nov. 27 at the Agricultural and Industrial Museum. The program features Ray Kinard speaking on agriculture and milling in York County and a demonstration of the YCHT Bradley Mill, a working mill, at the museum.
Recommended blog post of the day: Yorkblogger Scott Mingus writes about the Civil War: Old diary from Yorker in the 3rd PA Heavy Artillery.
Forum of the day, The Exchange: People weighing in on the planned demolition of the carousel house at Brookside Park.
Also:
– All York Town Square posts from the start. (Key word search by using “find” on browser.)
– All Linked In/Neat Stuff posts from the start..