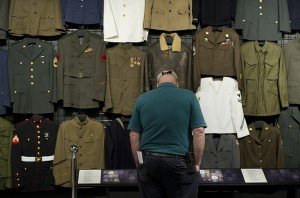 This photo accompanied a York, Pa., Daily Record/Sunday News story about York County heritage and cultural groups struggling financially in a poor economy. Here, Springettsbury Township’s Lee Davis takes in the exhibit “Front Porch to Front Lines: York County Goes to War” at the York County Heritage Trust. The topic of sustaining heritage agencies in tough times is a serious one, but what prompted me to post this was this wonderful image. Also of interest:
New York County exhibit covers 20th-century wars: ‘We willingly served our country because they asked us to’

A French-built steam runabout, billed as the world’s oldest running family car, has sold for $4.62 million at an auction of antique and collectible cars in Hershey, the Associated Press reports.

“The auctioneer says there are older running vehicles, and some older cars that possibly could be made to run again, but ‘La Marquise,’ as it’s known, is one of the world’s most important collectible cars,” the wire service reported.

Estimates before bidding began placed the value of the 1884 vehicle at $2 million to $2.5 million.

York County plays host to circa 100-year-old automobiles, mainly York-made Pullmans on display at the Agricultural and Industrial Museum.

Website of note: Papergreat touts itself as a repository for books, ephemera and paper. And it is at that. Operated by York Daily Record/Sunday News sports editor Chris Otto, the site has posted such intriguing content as:  The Herbalist Almanac for 1976 and This week’s ephemera preservation success story.

Event of the day: “Ice Farming on the Susquehanna.”

What’s that about? Those attending the lecture tonight by Lynn Smoker will find out.

But for those who can’t, here’s a tease: “What did our forefathers do before the days of electricity? How did they keep milk cold? Turn back the clocks to the 18th and 19th century and experience the days of ice farming on the Susquehanna River. Retired teacher Lynn Smoker researches and collects the tools and implements used in ice farming. Artifacts and tools will be on display as part of the lecture.”

Forum of the day: Exchangers are discussing the good news that Books-A-Million is going into the former Whiteford Road Borders and also the Hanover Mall.