On the beach: Bike shows the reach of York-made products – Linked in with neat York County history stuff, May 26, 2012 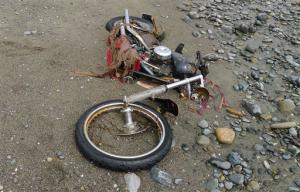 This Harley-Davidson Softail motorcycle was made in York. It’s the famous one that has been in the news since it was washed away from last year’s tsunami in Japan and ended up months later on the beach in Canada. A couple of interesting points: The bike, made in Harley’s Springettsbury Township plant, shows the reach of York County-made products. That not new, only a good reminder. And the presence of the American-made cycle in a land that produced bikes that have been challenging its success for years is rich, indeed. The owner of the 2004 bike, by the way, is fine if the Softtail ends up in the Harley-Davidson museum in Milwaukee. Perhaps it could be part of a traveling exhibit that would make a stop in York. Also of interest: Check out dozens of stories and photographs about Harley-Davidson in York County. and 7-decade-old Harley plant in York has produced much more than motorcycles.

Many young people today never have experienced a drive-in movie.

There’s one such icon left from a day that a half dozen or outdoor movie drive-ins operated in and around York County.

Haar’s is celebrating its 60th anniversary this year, and this graphic/story – Let’s all go to the drive-in – explains the experience up there. (And find out the two feature films.)

Continental facelift: Changers are planned in and around York’s Continental Square. City leaders want citizens to weigh in on those changes, and York Sunday News columnist Gordon Freireich explains how that can happen. Check out Gordon’s “What are you looking for in an updated square?”

It’s free: The York County Heritage Trust is part of the Blue Star Museums program. That means that all of this historical society’s sites are free to military personnel and their families starting today through Labor Day.

How we treat our troops: For Memorial Day, ProPublica collected the best stories of accountability journalism for our troops. Here’s one such story from 2003: Humvees are in short supply.

Forum of the day: Exchangers are discussing “A vibrant York City.”