York County loses a chronicler of its history: Linked in with neat York County history stuff, May 10, 2012 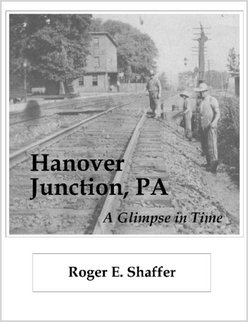 The recent death of Roger E. Shaffer, a fan and student of Hanover Junction, placed a spotlight on his website hanoverjunction.net and in other publications.  This Hanover Junction historian died on March 22. The site has a wealth of information and photographs of this noted railroad station near Seven Valleys, best known as the location where Abraham Lincoln changed trains in his trip to Gettysburg to deliver his famous speech in 1863. The site also gives says this about its content: ‘It’s also about the experiences of a boy growing up in the Hanover Junction railroad station in the early 1900s.’ Hanover Junction – and York County – will miss this chronicler of its history. Pictured is one of Roger’s publications available via his website. For more about Roger Shaffer’s life and times, read blogger Blake Stough’s: Hanover Junction loses one of its sons. Also of interest: Will Steam into History Inc. locomotive steam into York County history?

The York Daily Record/Sunday News updated its report about a portrait of Abraham Lincoln that has been in the news:

“A portrait of Abraham Lincoln being sold by a Hellam Township man in eBay sold for $2,225.

“The auction ended this afternoon.

“John Wills has originally sought six figures for the painting, which he believed was an original that the 16th president had posed for. At least one expert, though, disputed that.

“The identity of the buyer was not known.”

Former judge dies: Veteran York County attorney Bud Blakey died this week. This accomplished man is known for many things, including the unusual – maybe unprecedented move – to retire his judgeship and return to private practice.

Blog post of the day: Joan Concilio over at Only in York County tells about this landmark of old in York: Schwenk’s Newstand.

Forum of the day, I:  Some people, including someone in the newspaper story on the floating fire pits, refer to the creek as a river – the Codorus River. How does that work for you? Please comment below.

Forum of the day, II: Recent news has spotlighted York Water Co.’s long-held decision not to add fluoride to its water, much to the chagrin of local dentists and many users: http://bitly.com/JdRXYr. Do you agree with York Water Co.’s decision against fluoridation or should the water supplier add fluoride? (Lancaster added in 1960 as this Walt Partymiller cartoon illustrates.) Comment below or on the YDR’s Facebook Page.