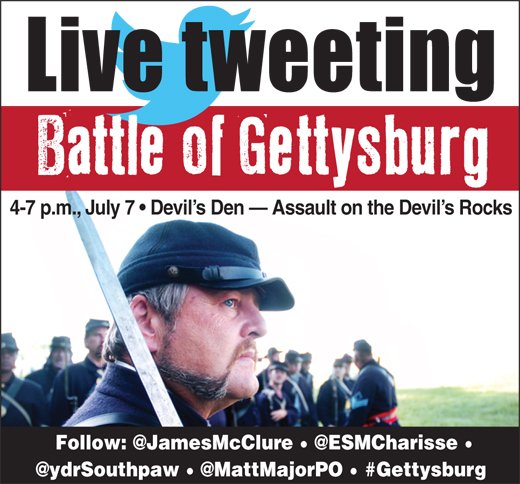 Four journalists from three southcentral Pennsylvania news organizations will live tweet a Battle of Gettysburg reenactment of one fight in the Battle of Gettysburg. The Hanover Evening Sun’s Marc Charisse, Chambersburg Public Opinion’s Matt Major, York Daily Record’s Pat Abdalla and I will use social media’s Twitter to tell about the reenactment of fighting around Devil’s Den. Also of interest: Using York County history to create community embodies a modern trend.

The Gettysburg event this weekend is called ‘Devil’s Den – Assault on the Devil’s Rock.’ And four colleagues from our southcentral Digital First news group will use social media to cover it in real time.

Twitter is a handy tool to tell stories about our history because it is so immediate. I realize that using ‘history’ and ‘immediate’ in the same sentence can be jarring. Putting it another way, social media is a tool to tell about history as it’s being made (sometimes called journalism). Only in the case of Devil’s Rock, it’s reenacted history.

Live tweeting essentially means that you’re telling a story in real time in 140-character pieces. The tweets will then automatically flow into a story on our three websites to reach an expanded audience.

Btw, Marc Charisse took a practice run in live tweeting last week when he used Twitter to cover activities relating to the 149th anniversary of the Battle of Hanover. Buffy Andrews provided a bit more background on such social media coverage with her post: Some cool Gettysburg Battlefield stuff: Re-enactment tweets, photos via Geofeedia and more.

People will be eating hamburgers by the thousands on July 4, so it makes sense to visit a time when York County’s famous hamburger – Joe Bury’s – was king. Stephen H. Smith has viewed a photograph of Bury’s food stands on East Market Street in York on Joe Bury’s Famous Hamburgers Facebook page.

Here is his assessment of those Bury’s businesses:

“As an update to my recalling the Bury’s ice cream and hamburger stands side-by-side along East Market Street. After a little research in Polk’s Directories at the York County Heritage Trust, I had the general area correct: except Bury’s side-by-side stands were really located one block to the west of my initial recall. They were located on the southeast corner of what is now Northern Way and East Market Street; currently located on this corner are Cloister Car Wash and Wendy’s.

“It was Hickey’s Drive-In one block to the east, opposite the Springettsbury Fire Company. The Bury’s photo is likely before 1959, when directory listings change from Bury’s Dinner and Bury’s Ice Cream Bar, to Bury’s Famous Hamburgers and Bury Bros. Soft Ice Cream. Also during 1959 Bury Motors springs up on this lot, selling used autos. Bury Motors eventually becomes Bury Amusements & Rides. All these Bury businesses including hamburger and ice cream stands ceased operation in the area between 1969 and 1970.”

Stephen’s observations appear as comments on this yorktownsquare.com post. Check out a host of posts about Bury’s hamburgers here, including this post that gives away the secret recipe for that special red sauce.

The book tells about the “sinful side” of Carlisle, according to a news release.

The release gives these examples:

– A gambler uses explosives to get rid of a meddlesome bride.

– A disturbed cross-dresser with loose ties to Jack the Ripper prowls the streets at night.

– An iconic football coach is the subject of a federal investigation.

Joe Cress, you might remember, wrote a book about York County that was part of another series: “Murder & Mayhem in York County, Pa.” Wonder if he has a ‘Wicked’ book planned for York County. To contact Joe, email: joseph.d.cress@comcast.net.

Forum of the day: Gas prices are pointing downward – toward $3 a gallon around York County. Do you drive extra miles to get a lower gas price per gallon, stick with one favorite store or station or a little of both? Please comment below. Background: To read about how convenience stores have interacted with York County history, check out: How one spot tells much about what’s going on around here. 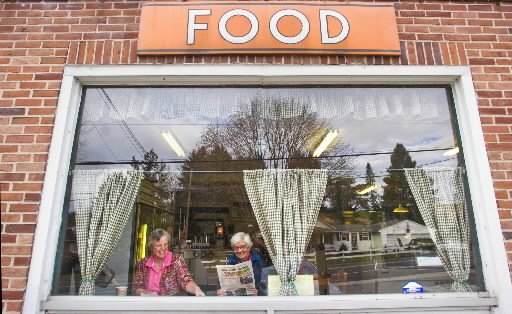 This photograph ran in the York Daily Record/Sunday News in late 2011, but I’ve wanted to get it on this blog for a long time. Photographer Paul Kuehnel’s caption states about this old-store-turned restaurant: ‘Becky Pfeiffer bought the community store she knew as a child. At age 52, after working for others all her life, she embarks on the American dream of owning her own business.’ To see a video of this Lower Windsor Township scene, check out: http://bcove.me/yzhziy70.