Much history has happened on Accomac site: Linked in with neat York County history stuff, July 18, 2012 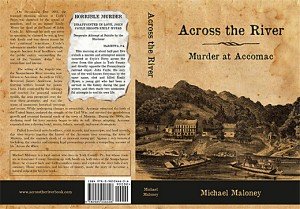 The Accomac Inn and the area around that landmark on the Susquehanna River has captured attention of the public for decades – centuries. Red Lion’s Michael Maloney is one of those folks, and he turned his interest into a book: ‘Across the River: Murder at Accomac.’ His 480-page book covers the history of the Accomac property from 1722 to today. In an email, Mike wrote that the first part of the non-fiction book (it contains some chapters of historical fiction) covers up to May 31, 1881. The book covers the murder of Emily Myers by John Coyle on Memorial Day, 1881, and the subsequent trial and execution of Coyle. The last part of the book brings the property up to the present. A neat Facebook page is associated with the self-published book showing photographs of the Accomac area. For details, contact Mike at acrosstheriverbook@yahoo.com. Also of interest: The view from Chickies Rock: Little Pittsburgh on the banks of the Susquehanna River?

The annual reenactment of the Confederates’ burning of Chambersburg is set for Saturday. Check out this Chambersburg Public Opinion story about the reenactment, undertaken with lasers.

The burning of Chambersburg is sometimes anachronistically used to justify the surrender of York to the rebels in 1863. York’s city father were concerned Gen. Jubal Early would burn York, so that thinking fostered the surrender. And to be fair, the Confederates had burned political foe Thaddeus Stevens’ iron furnace in Franklin County on their way to York.

But at that point in the war – in the days before the Battle of Gettysburg in 1863 – the Confederates were not in the mode of destroying civilian-owned property.

But the Confederates in Chambersburg, also under Early’s command – burned Chambersburg. But that was 12 months after the occupation of York, and the mood of the war had changed.

So discussion about York’s fathers surrender of their borough continues.

Forum of the day: The goofy HoodiePillow is the most recent made-in-York County product that is making headlines: . York countians have made weird, everyday and usually useful stuff over the years. What is your favorite locally made or grown item? (Candy and food is eligible, too.) Please comment below. Btw, here’s one of those arcane, but needed products from York: Torpedo, bomb loader, made in York, Pa., turns up in Tennessee museum .