Not 1, but 2 York County smokestacks coming down: Linked in with neat York County history stuff, Aug. 26, 2012 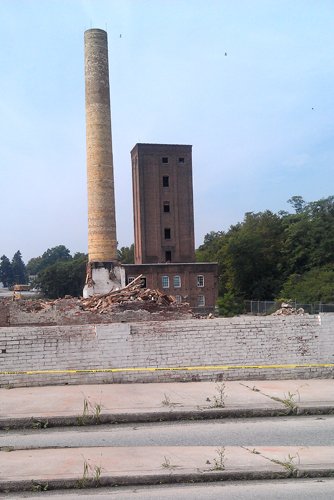 Many people are aware that the smokestack at the old Foust Distillery near Glen Rock is coming down Tuesday morning, Aug. 21. A lightning  strike made the old landmark unstable, and news of its  pending demise was met with regret around the county. Not yet publicized is the pending demolition of another towering landmark of note. It’s the one, pictured above, that stood guard over the New York Wire Cloth works in Mount Wolf for decades. Its companion drying tower is also coming down, workers at the site said last week. How do you knock down a stack? The workers said you lasso the column and then tighten it until it collapses. A spokesman for Hub-Scrap of Hagerstown did not set a date for the demolition. Both demolitions will be interesting to watch. But what do they represent? They’re more evidence, seen over the last several decades,  that our smokestack economy is changing to information and service-based industries. The building that housed New York Wire’s offices for years will remain standing, the workers said. The smokestack comes down, and the office building remains. Case made. By the way, a third smokestack, the lightning-damaged tower at Hanover’s markethouse, remains standing. Those Hanoverians are stubborn. Also of interest: Spirits put Foustown, the ghost town near Glen Rock, on the map.

Was Seven Valleys the home of the first commercial manufacturer of ice cream in America? A historical marker in Seven Valleys says yes.

Switching gears: Yorkblogger Scott Mingus usually writes about the Civil War. But he in this post he tels the little-known story about three of Mad Anthony Wayne’s men who are buried in York County. Wayen was in the county in the American Revolution.

Best of blogs: The York Daily Record/Sunday News mobile media van – The NewsVroom – is unveiled and will make its maiden voyage at the football game at Central York High School Friday. And NewVroom as its own blog. So the van is now a Yorkblogger. 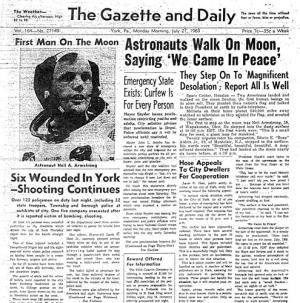 Some York countians remember the first moon landing undertaken by Neil Armstrong as the best of times and the worst of times. As Armstrong, who died Saturday, was stepping on the moon, rioting was erupting in York – the infamous race riots of 1969. Remember that time? If so, comment below. And check out the memories of others as expressed in ydr.com’s ‘Remember‘ oral history series.