What is the story of the Midway Motel in Loganville? Linked in with neat York County history stuff, April 24, 2012 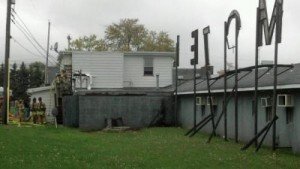 Twenty people were evacuated from this Loganville motel, the Midway, on Monday after a fire at this North Main Street lodging place. This view helps place the motel because it captures its distinctive sign. The motel tends to get lost among newer growth. The date of this motel is not easily pinned down. Was it an old road motel that serviced customers on the Susquehanna Trail? Or was it built in the late 1950s to take advantage of Interstate 83 that was then poking through York County, replacing the Trail as the county’s main north/south route? And why is it called Midway? Did that stem from its location between York and the Mason-Dixon Line? Comment below if you can help. At any rate, its proximity to the interstate via the Loganville interchange no doubt prolonged its life. Another motel farther south along the Susquehanna Trail and not accessible to the Interstate – Besser’s Service Station and cabins – did not fare as well. More on that old landmark in an upcoming post. (Click on the photo to enlarge. See this postcard of the motel in earlier days.) Also of interest: The Susquehanna Trail: Greatest highway in Eastern America?

An interesting discussion surrounded a query over at Blake Stough’s Preserving York group on Facebook (which I recommend).

Where do you find books on the various towns throughout York County?

Here was my response:

“A browse through the trust’s book shop would certainly net you some. Some, you’ll just have to look at in the trust archives because they’re out of print, e.g., Charles H. Glatfelter’s history of Jefferson. But here’s an overlooked source: the York County Library System. Many municipal histories are there. Just search the catalog at www.yorklibraries.org. For example, search for Spring Grove and you’ll get the Spring Grove Years, a very good local history. Also, you can check histories on websites of the various local historical societies around the county: /yorktownsquare/great-history-site-list/. Some are extensive histories and others are brief. But there are contact people throughout.”

A look back: Check out Gametimepa.com’s Past champions of the YAIAA for a wealth of information on York County sports history.

Are you into Pinterest? A ydr.com post about Pinterest continues to get traffic from all over. It’s back in the top 10 most viewed. Evan Sharp, York Suburban grad, co-founded this widely popular social media site. Check out this post about the YDR’s interest in Pinterest.

Hunting in Gettysburg: This Hanover Evening Sun story explores the issue of hunting on the battlefield in Gettysburg.

Forum of the day: York Daily Record/Sunday News staff members chatted with the public on the weekend story about how people are faring in Red Lion, 9 years after the shooting of junior high principal Eugene Segro and other violence in that district in those years.