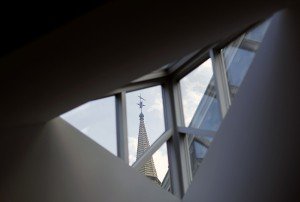 Recognize this steeple? Hint: It’s 160-feet tall was recently surrounded by a major renovation to the church below. For the answer, please see below. Also of interest: York’s Little Green Church.

Sue Borton lives in Bronxville, N.Y., but she has all kinds of family ties to York County. And she wants to know more about these ties.

Here is her excerpted query:

“I am requesting information relating to the town of York that dates back to the early 1940’s, earlier if possible and up to 1956.

“I was born in York in 1947 to Louise Lever and Walter E. Anderton.  My mother worked at Bears Department Store and my father worked for the Gazette and Daily… .”

“In trying to lightly research some memorabilia for them, as they are now both 90 years old, I am unable to find any articles that they could read that would be enjoyable for them now.  After the war, they continued to work, especially my father who went onto to become a journeyman for the Gazette.  My mother returned part time for Bears.

“However, they are mostly interested in the Bell Building.  My mother is a direct descendent of Annie Gehley who owned this building as it was a carpet house.  It is my understanding that this building may still exist in the town square.  I am told it was solely owned by the Gehley family until her death and the bank subsequently took ownership.

“I am living in Bronxville, NY and have been for almost 32 years now.  My parents left York in 1956 and moved to Florida and settled in Miami.  They retired there and visited York on occasion where they still visited friends.  Most have passed away by now as you can imagine.  My mother grew up on Carlyse (Carlisle) Avenue and later moved to Manheim Street.  This is where where I remember some of my early childhood before we left for Florida.  My father was born in Baltimore, MD and moved to York in the early 40’s and was hired by the paper where he met my mother while delivering ads to the department store!  The rest is my history!!

“Any correct facts or history would simply be enjoyable to my parents at this time. If you have data or are interested, please email me at: sueborton@yahoo.com

Libraries alive and well: Barbara Krout, co-President of Friends of Kaltreider-Benfer Library in Red Lion, wrote to remind the public about the offerings of libraries.

“We are all saddened by the closing of Borders Book Store.  May I offer an alternative?  The Kaltreider-Benfer Library in Red Lion.  Borrow books from our large collection; if your book is not in our library, we will procure it via the York County Library System.

“Our reading areas have copies of daily newspapers including the Wall Street Journal, USA Today, and both local newspapers.  A copy of the New York Times in large print is available on a weekly basis.  Wireless internet is available throughout the library as well as in the parking lot!  Additionally, fresh coffee, tea, and hot chocolate is available for $1.00.  Just one of the library’s perks (forgive the pun!).”

Recommended website: Public broadcasting’s witf has published “The Power of Words: Pennsylvania Writers and Publishers” on its ExplorePAhistory.com website. For a news release on the publication, visit: Writers.

Forum of the day: This Exchange post about  the Gatchellville Cemetery, north of Fawn Grove, continues to draw comments, months after the thread went up.