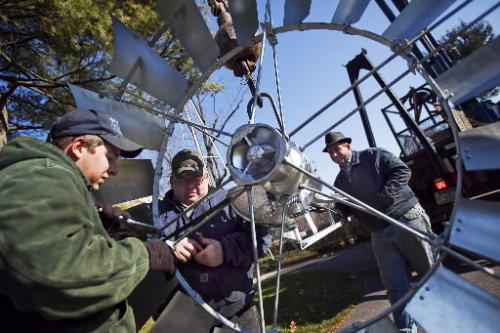 A storm damaged the landmark windmill at the Eisenhower National Historic Site near Gettysburg. So the Gettysburg Foundation funded a new windmill, shown in this Hanover Evening Sun photograph. (See additional photo below.) ‘It’s an iconic landmark and reminiscent of the Midwestern farms where (Dwight D.) Eisenhower lived as a boy in the early 1900s … ,’ the Evening Sun reported. Also of interest: See scores of posts about about Ike Eisenhower, serving as commanding general in Europe in World War II, as U.S. president and then living after retirement in Gettysburg.

You’ve heard about – and maybe experienced – the Bon-Ton Santa Claus of old.

“He was out of a job at the time . . . and he had a friend who was working at the Bon-Ton and knew they needed a Santa and that Charlie was available,” said Howard’s wife, Laraine.

Charlie Howard would go on to don his red suit for the next 30 years, often with Laraine at his side, dressed as Mrs. Claus.

Going into downtown York to see the decorations and visit with Santa was “a huge deal,” even when she was a growing up in York County, Laraine Howard said.

“It was always such a family thing,” she said. “That was one of our treats.”

This is just interesting: A York County farmer takes unsold Christmas trees and turns them into feed for meat goats. Certain ethnic groups in York County and elsewhere enjoy the meat.

Forum of the day: You can’t vote anymore (and feel free to comment below), but unscientific vote totals to the question about whether York countians love or loathe the annual New York Wire Factory Whistle Concert are in. Big hint: 81 percent love it. Check out the results. Btw, the concert this year came off with a hitch. Check out: Overheated compressor. 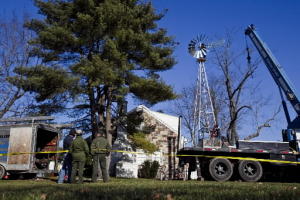 The new windmill stands 40-feet tall on the Eisenhower Farm, where Ike and Mamie lived after leaving office in the early 1960s.