Scarred Civil War soldier took the surrendered York flag and ‘stood with it in his arms, holding it in front of him’ 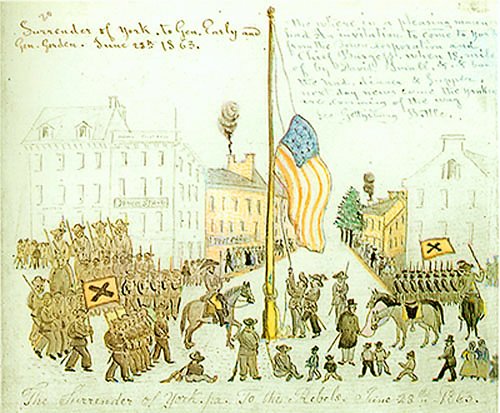 ‘Surrender of York to Gen. Early and Gen. Gordon, June 28th 1863,’ wrote Lewis Miller atop his drawing of this significant moment in York County, Pa., history. The Confederates overran York County in these late-June days before the Battle of Gettysburg. They pulled down this flag in York after the town’s fathers sought them out at their camp, 10 miles to the west, the night before. York’s Committee of Safety surrendered the town in a deal that looked like this: York wouldn’t resist the rebel advance if the Confederates wouldn’t burn it and otherwise harm the citizenry. In this drawing, notice the Confederate flags carried by the various rebel units of the Army of Northern Virginia. As far as is known, no Confederate flag was hoisted atop this pole. This is one of two iconic drawings of Miller’s work showing the Confederates in York’s square.  See below for the other drawing. Both are part of the York County Heritage Trust’s extensive Miller collection. More:  Pro/Con: Should York’s leaders have surrendered to the rebels.

One May afternoon in 1861, workers raised a 110-foot-tall pine pole with a foot-thick base in York’s Centre Square.

It stood tall between the two squat market sheds at Market and George that had occupied this public gathering space for years.

Judge Robert J. Fisher and the Rev. J.A. Ross of York’s Methodist Church addressed the large crowd that had gathered for the pole raising.

A beautiful bunting flag was run up the pole as a band played “The Star-Spangled Banner,” then a patriotic song appropriate for a Northern town whose side was then embroiled in a bloody and corrosive Civil War.

Earlier, the pole raising came at a price.

You could say that the doctor’s wound was an early casualty of this escalating war.

Two years later, the pole and its banner – now a 35-foot-long flag of heavier material made by women – awaited the gray-clad enemy marching east on the Gettysburg Pike.

Gen. Jubal A. Early’s soldiers carried flags of the Confederacy. Their design was akin to the flags that have drawn such controversy 152 years later – banners that still fly prominently around the South. But since a massacre in a South Carolina church a month ago, fewer are seen.

Many York residents on that day in 1863 never wanted to witness those stars and bars of the Army of Northern Virginia.

But there came the Confederates marching, in three columns, toward the heart of York borough, the market center of  York County.

A last-minute debate occupied some of the citizens. Should that big flag atop that tall pole remain flying?

“Is it possible that I have lived to this day to see the flag torn down and trampled in the dirt?” veteran attorney John Evans asked. That might happen if the Confederates got hold of it.

You see, that flag had a special meaning for many townspeople. Meeting in  the county courthouse on that very spot 86 years before, Continental Congress had adopted a document – the Articles of Confederation – that represented a union of sorts for the 13 Colonies.

The destruction of that flag at the hands of the Confederates would represent disunion and undermine the acts of bravery of the American Revolution.

Prominent businessman Latimer Small ended the debate with pragmatic words – perhaps an extension of the panicked thinking that prompted the surrender in the first place.

“Let them take the flag, and I will replace it,” he said.

That left the flag up, but that moment brought down tears.

The historical record does not state with certainty what happened to the 35-foot flag that the Confederates pulled down that day.

Most point to the Confederates carrying it away, perhaps using it as bandages in the subsequent bloody fighting in Gettysburg. Only one story reflected the fears of those who felt that the Confederates would trample it on the ground – and that is far from certain.

Pearce’s bookstore also flew a flag that the Confederates took down. The story goes that the rebels trailed one of the flags –  from Centre Square or  Pearce’s – down East Market Street.

The most compelling story comes from contemporary research, courtesy of author and historian Scott Mingus.

W. H. Harrison, an officer in the advance guard of Confederates entering York, recalled years later that he ordered the flag to be folded and placed on a sidewalk, with orders to put it in the first ambulance and wagon that came along.

Harrison wrote to The York Dispatch’s owner in 1888 that a young man, in citizen’s dress, came up and asked if he might take the flag from the sidewalk and hold it.

“I told him if he thought it would do him any good he might take it up and hold it,” Harrison wrote. “He took the flag and stood with it in his arms, holding it in front of him.”

Later, the flag was taken from the man, placed in an ambulance and, Harrison conjectured, was taken back to Virginia.

He described the young man who held the flag as having a scar on his face and understood him to be a soldier who had been discharged from the Union Army after he was wounded in battle.

Harrison tells this story with great authority and clear recollection. If his detailed account is true, the wounded young man goes down as an unsung hero of York County.

The historical record does not indicate that the Confederates hoisted their own flag. One can only speculate why they did not.

Did they not have a regimental flag large enough to command authority 110-feet in air?

Did they choose not to antagonize the citizens of York, who were not resisting the invaders’ real mission – to capture the bridge at Wrightsville?

In all of this, one must ask:

If the Confederates did not make a public show of their flag in the surrendered town of York, why do some folks around York County and beyond insist on making its display a big deal today.

That goes for its placement as a front license plate or bumper sticker on vehicles,  its display in the windows of homes or those times in which it’s hoisted atop a flagpole.

In York County in 1863, the Confederate flag caused terror and tears as an army from a foreign country marched across the land.

At some level then and now, the Confederate flag pointed to the bondage of people based on the color of their skin.

A better lesson from this late-June moment in York’s square is to double down on our respect for the American flag.

We should show it the same reverence and respect demonstrated by the young  York soldier, who bore that scar sustained in fighting for the freedom of others.

Pro/Con: Should York’s leaders have surrendered to the rebels? 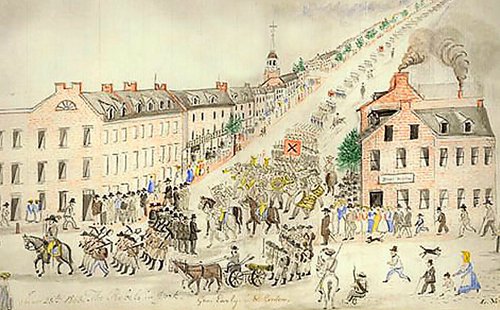 Notice how the detailed eye and hand of Lewis Miller caught the flags as the the Confederates entered York. Also of interest: Check out these Civil War stories and photos from YorkTownSquare’s archives.

*Much of the narrative here comes from my ‘East of Gettysburg.’