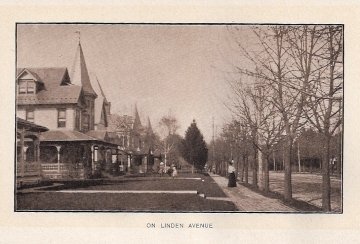 Linden Avenue in Northwest York was an interesting blend of residential and industrial. That wasn’t a coincidence. Linden, in the Avenues, provided homes for workers and execs of nearby industries. And not just nearby industries. A trolley line, on its way to Dover to the north and York’s square to the south, ran by there giving neighborhood residents access to, really, most of York County.Indeed, the Avenues grew up with the trolley. This postcard, courtesy of York countian Dianne Bowders of ydr.com’s Your Photos site, provides an 1890s view of Victorian homes on Linden. The original photographer was A. Walter Orwig. Of course, the best example of one of the grand homes in that neighborhood is the beautifully restored Lady Linden.  Linden was in the news last week with the ribbon cutting for a former factory along its length, the old York Casket building. It has been converted into the residential Linden Lofts. Also of interest: Trolleys helped make York’s Avenues sought-after locale.

Jonah Lehrer is a popular scientist/writer with close ties to York County.

We’ve featured his work several times on this blog: Author with York County ties: Learned the brain inside and out in writing ‘How We Decide’ .

Well, he’s under fire nationally because of some of his journalist practices. Check out this Book Buzz blog post for a rundown.

Doleman in hall: York High grad Chris Doleman was inducted into the NFL Hall of Fame last evening. Wonder what took National Football League so long? He’s the only York countian to make a hall of fame in a major sport.

Forum of the day: York countians have experienced unusual weather cycles for years. We’re in the middle of another one with daily afternoon shower, including another storm predicted for later today: http://bitly.com/Mqc4qR. What do you make of all this weird weather? Please comment below. Example of weirdness from York County’s past? York County residents passed through fire and water, or water and fire, in 1822