Lincoln Highway Communities: ‘I know I’ll be back’ 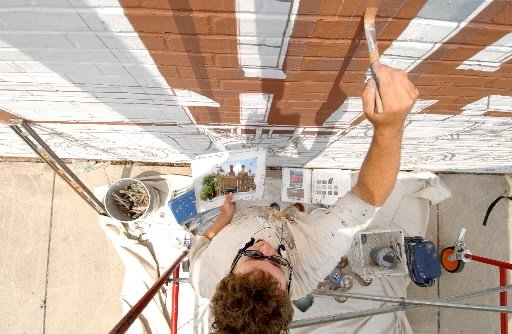 Lincoln Highway Heritage Corridor commissioned this mural in Abbottstown, as well as the one below in Gettysburg. The non-profit group has overseen the drawing of murals and the installation of exhibits along a 200-mile stretch of the Lincoln Highway.

York Sunday News columnist Gordon Freireich recently gave an absorbing tour of the Lincoln Highway – Route 30 – in and around Abbottstown and New Oxford.
Around is appropriate here because those circles in the center of those towns make them memorable on that feature alone. (Goldsboro and Jefferson are two York County towns that route traffic in a circle around a monument or park.)
Lincoln Highway Heritage Corridor officials, promoter of the communities along this old thoroughfare that tied together the Atlantic and Pacific oceans, saw his column and will reprint it in a future newsletter.
One of the roadside exhibits sits in front of the Altland House on Abbottstown’s Circle. That and the nearby mural are as far east as the group’s roadside museum extends… .

This abrupt stop near the Adams County line has always puzzled some in York County, who would like to see the murals and markers extend along our stretch of the Lincoln Highway to the Susquehanna River.
This is a good project for some enterprising legislator or community organization looking for a project to tackle.
Gordon’s column follows:

I had occasion to drive to Gettysburg recently.
It was an unusually enjoyable drive, because the traffic was relatively light for that time of day and I could enjoy the scenery.
As I approached the Square in Abbottstown, I noticed a mural on a wall just east of the traffic circle. It depicted scenes from the Abbottstown area. But what caught my eye – and I know I missed it on my previous trips past the mural – were the words: “A Lincoln Highway Community.”
That replaced the usual thought I have as I drive through Abbottstown: Why is the Hanover Country Club in Abbottstown and not Hanover?
A Lincoln Highway Community. That got my mind racing as I carefully made my half-loop around the square: What a great way to identify yourself with your neighboring towns and the rest of Pennsylvania.
I remembered having visited Rep. Keith Gillespie’s office east of York, near Hallam, and noting that the address was “Lincoln Highway,” not East Market Street or Route 462 East.
As I was driving west the other day, I saw the signs that always make me smile in York County, past Thomasville: “Farmers” and, just a swath of highway down the road, “You Are Now Leaving Farmers.” That’s a village with pride. And probably a candidate to become “A Lincoln Highway Community.”
I also noticed a number of restaurants that proudly called themselves “Diners.” When you see the word “Diner” you know what you’re going to get: good, homemade food, reasonable prices, counter seating and a waitress who is going to call you “Hon.” How down-home can you get? Does the Lincoln Highway Community have the largest concentration of diners in America?
As I neared New Oxford, I was reveling in the beauty of the countryside. I knew I was in the country because I saw some unfenced chickens along the side of the road in a front yard. They looked too content pecking away at the ground to contemplate how to cross the road.
Thinking of “Lincoln Highway Communities,” I drove around the traffic circle in New Oxford. (Modern engineers give traffic circles the silly name of “Traffic Calming Devices.” But Abbottstown’s and New Oxford’s circles were in place long before engineers dreamed up that name.)
New Oxford is just a beautiful town. It overflows with wonderful Victorian architecture mixed in with a few Federal style structures. Antiques shops line the streets. “A Lincoln Highway Community” just begging visitors to stop and linger a while.
Beyond New Oxford, Route 462-Lincoln Highway becomes York Road.
In one blink I could envision wagon-loads of pioneers making their way west from the more “settled” parts of York County. In another blink, I could see gray uniforms and blue-suited soldiers marching along the road in steaming, summer weather toward their destiny at Gettysburg.
Nearing my destination, I kept thinking:
Lincoln Highway Communities: Alive with farmland, history, antiques, places to eat.
More York countians and visitors should make that drive along the Lincoln Highway.
I know I’ll be back.