‘Levittown’ tells about the Myers family’s quest to live the American dream – in York, Pa., too

David Kushner’s “Levittown” tells the story of the York, Pa.’s Bill and Daisy Myers and the discrimination they faced after moving into a new house in Bucks County’s Levittown in 1957. Background posts: Future Yorker Daisy Myers’ harassment in Levittown part of NYT mag article and York’s and Levittown’s Daisy Myers: Rosa Parks of the North and A short test of your York black history knowledge and Mattie Chapman’s barrier-breaking legacy apparent in York County 30 years later.

In her memoir “Sticks ‘n Stones,” Daisy Myers wrote about her family’s terrible confrontation with discrimination after buying their dream house in the new, all-white Bucks County suburb of Levittown in 1957.

She told about that experience, and brought readers up to date about the family’s later years after moving back to York, her husband Bill’s hometown.
Author David Kushner did what journalists call a “write through” in telling the Myers’ Levittown story. The 2009 work draws from – and expands upon by bringing in many other sources – Myers’ 2005 memoir… . 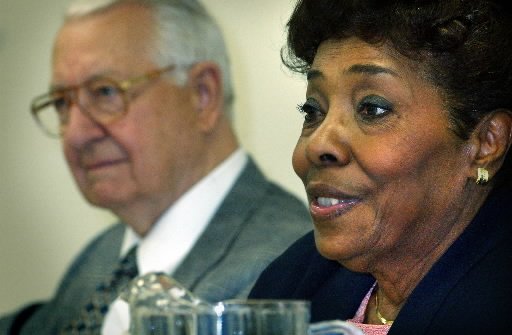 Daisy Myers with York native and  former Pa. Gov. George Leader at a York College Forum in 2002. Then-Gov. Leader sent in the state police in defense of Myers’ family in Levittown in the 1957.

He provides details, for example, from the family’s first stint in York County before they moved to Bucks County. Bill and Daisy Myers had some difficulty in finding a home in York because of discrimination.
He provided much useful background about how the planned suburb of Levittown came to be, in the first place.
I wrote about Daisy Myers’ experiences in York County – they proved to be more positive when they moved back post-Levittown – as part of my York Sunday News column (5/24/09).
To read the column, “Primary offers more signs of racial progress,” click here.