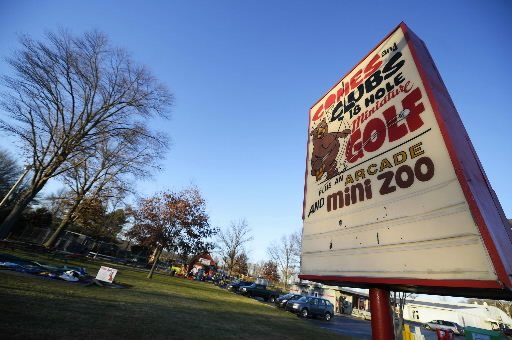 The official name is Jim Mack’s Ice Cream/Cones and Clubs, but locally everyone calls it Mack’s or Jim Mack’s. And it’s home to Little Ricki, an 18-year-old female bear, its mascot for the past 16 years. Mack’s is a local institution that has gained a spot in international news after being on the receiving end of a public-nuisance civil suit. The plaintiffs are concerned about Ricki’s care and want her moved to a bear sanctuary. Also of interest: Mack’s is short for McDaniel’s, but in York County it means ice cream, Part I.

It was one of those warm, late summer evenings in the Wrightsville area with a brilliant sunset and all.

The outside area of John Wright Restaurant was hopping. Maybe there was a Penn State game on TV or homecoming at a local high school. Or maybe the eatery’s lawn is always like this in nice weather.

Down river at Long Level, the people strolled the grounds of the  Zimmerman Center for Heritage. A boater motored in to look at the interpretive plaques. Everyone sampled that dock floating in the Susquehanna.

Then above all this – up on Highpoint – maybe 15 people enjoyed the panoramic view, complete with brilliant sunset.

Toward the river, there must have been a wedding over at the Lauxmont Mansion, its buzz drifted over to Highpoint. To the west – at Eastern York High School – the stadium lights illuminated that hilltop.

And the lights of Wrightsville and Hellam Township were popping on to the north.

But no place was more so than Jim Mack’s Ice Cream, the evening capstone for hundreds of people that evening – as it is every night in good weather. 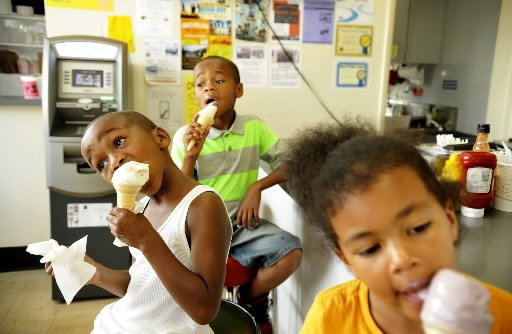 This is a familiar scene around Jim Mack’s in Hellam Township. Also of interest: Mack’s is short for McDaniel’s, but in York County it means ice cream .
+++

I regret not discovering Jim Mack’s sooner than just in the past couple of years.

It has been around ‘a while’ – since 1958, when James McDaniel Sr. opened the business.

I mention my regret because Jim Mack’s is a winsome place. First, when you evaluate taste, price and helping size, its ice cream ranks in the upper tier among such places around York County.

Then you go to the rear of the stand and sit on picnic tables and take it all in.

The well-lighted recreational area is abuzz on good-weather nights – basketball courts, arcade, miniature golf course and more They were all packed, but in a way that it’s still fun.

People of all ages go on dates there. Some people picnic. Others eat a full meal, hanging out inside the stand.

It’s like a year-round carnival with lots of energy – a Saturday in the park.

All this is good and deserving of a visit if – like me – you haven’t availed yourself of this wonderful piece of York Countiana.

Then there’s Little Ricki, the 18-year-old bear, in a cage sitting in the western part of this carnival’s grounds.

The York Daily Record reports that Ricki has been there 16 years, a beloved part of the place that gave her sanctuary after a wildlife officer called to see if Jimmy Mack would take in the young bear.

But in recent years, according to the York Daily Record, times have changed a bit.

Jimmy Mack has received increasing complaints about Ricki’s captivity. Now he faces a lawsuit that has drawn the international spotlight to Hellam Township. Some well-meaning folks want Ricki deposited in a bear sanctuary.

Jimmy Mack is mulling sending Ricki there. He wants to check things out to ensure she will adapt to her new surroundings.

There are no bad people here. All this will play out, no doubt, in a good way.

There are some things we all should mull about all this.

The first is for folks to learn from my mistake. Get out to places around York County and enjoy those spots that others have appreciated for years – and no doubt will for years to come.

And as the evening in the Wrightsville area indicates, a lot happens around York County on a given Saturday evening.

We still enjoy a sense a community, grounded in and informed by our history and updated to appeal to modern minds. Many other regions have been overrun by sprawl, and those places with character that allow a community to gather are lost to vanilla subdivisions.

Despite similar threats, we have maintained many of those places that a community needs for people to congregate to have fun, break bread and swap stories. This all adds to quality of life.

Wherever Ricki ends up, Jim Mack’s provides a piece of York County’s past and future. Let’s call it a sanctuary for people.

Mack’s and ice cream. In York County, they go together like Bricker’s and french fries, Smittie’s and pretzels and Bury’s and burgers.

The original Mack’s, the ice cream parlor that spawned a local chain, is no more. 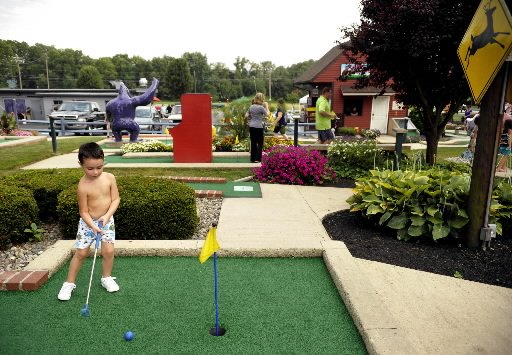 And another scene, the 18-hole putt putt course that is the “clubs” in the business’ name. Also of interest: York area full of memory-spawning landmarks.

The story of Mack’s, whose now-demolished parlor, stood for decades in Spry, from “History of York Township 1753-2003”:

“William C. and Minnie Flinchbaugh McDaniel started Mack’s Ice Cream Parlor in 1935. When the cigar factories began to close in Red Lion, many workers were out of work. The grandfather had a dairy farm and began to make ice cream. Eventually the brother of Minnie, Paul Flinchbaugh, started a business on the Winterstown Road and was then followed by a sister, Minnie, who started a business in Frysville. Mr. and Mrs. Mack worked there for some time before starting their own business on South Queen Street. At the age of 10, Louise Mack Godfrey would travel with her grandfather peddling ice cream to factories. Louise would make change and her grandfather would do the dipping.

“In the start of the business the ice cream parlor had a front porch. An ice cream container was put on the porch and ice cream would be served from there. A Bingo stand was in the rear of the building. After the games the people would then come to the store for ice cream. Louise would again help to make the change. Mr. Mack retired in 1953, giving each of nine children the business for two years. David (Butch) Mack operated the business from 1988, when he sold it to Walter Blake. Six of the children went on their own in the ice cream business after their two years ended.”

More:
Check out these stories and photos from YorkTownSquare’s archives.