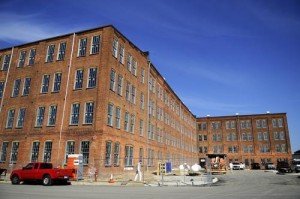 That’s about right. The red-brick industrial complex, home of M.D. Martin’s Carriage Works and later Keystone Weaving Mills, provided employment for people who worked with their hands for more than 100 years. Now, the West York complex, also occupied by Martin-Parry for years, is being shaped into red-brick loft-style apartments for workers. Developer Ingerman Group is a maker of workforce housing, meaning affordable lodging for workers. Interesting, M.D. Martin’s funding went to the York library that has served a mixed-income public since the Great Depression. Now his former building, Carriage Works Apartments, is being rehabilitated to accommodate a mixed-income public. Some of those apartment dwellers no doubt will wake up someday in their West York apartment and head down West Market Street to enjoy Martin’s legacy on East Market Street.(Click to enlarge; see interior view below.)  Also of interest: Martin Carriage Works project good for West York and York’s Martin Library observing 75 years in the reading business.

This year, a fifth representative will be elected to replace the retiring Todd Platts.

And a different type of candidate’s night is planned to help the public vet the candidates.

It was our Managing Editor Randy Parker’s good idea.

How about if we have a candidates night for the spring primary in which those running for office listen to the public, rather than dominate the evening with speeches?

And yes, candidates also will have the opportunity to address voters — after the electorate has spoken.

Perhaps this volunteer-driven institute “where curiosity never retires” should offer an OLLI course on how a non-profit sustains excellence.

And maybe the organization should add “where energy never wanes” to its slogan.

Blog post of the day: Buffy Andrews, over at Buffy’s World, posted best of the blogs for the week: Shady Dell renovation to new Pinterest boards to Smart e-zine

Forum of the day: The 912 Patriots conducted a straw poll of 4th Congressional District candidates this week. To find who gained the most votes in the bid to replace retiring U.S. Congressman Todd Platts, visit ydr.com‘s comprehensive York County politics/election page. 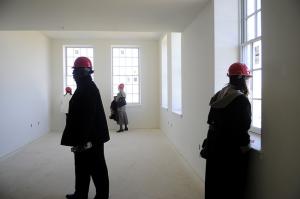 This apartment at Carriage Works Apartments in West York is unfinished. The four-story former factory will house 80 units. (Click on image to enlarge.) See the York Daily Record/Sunday News story on this project (where all this info and photos came from), plus a cool video of its interior.