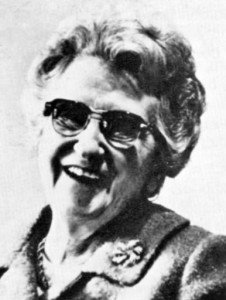 “My Weekly Reader,” that children’s newsletter so familar to millions was the brainchild of a York County educator, Eleanor Johnson. Background posts: Katharine Beecher, ‘Legacies’, Delma Rivera, ‘Legacies’ and One-room memories flow from readers’ fingertips.
In the 1920s, York County educator Eleanor Johnson was concerned that students did not know what was happening in the world – “not a flicker.”
That was the seed that started the children’s newspaper “My Weekly Record.”…

Eleanor Johnson is one of 50 York County women of achievement featured in AAUW’s
“Legacies.”
The booklet is out of print but available at York County libraries.
More information about Johnson, adapted from “Legacies” follows:

The idea for the newspaper that became “My Weekly Reader” came to Eleanor Murdoch Johnson while she was the director of elementary schools in York.
“I saw children reading folk and fairy tales and myths, which I adore, and to which there is no objection; but the pupils had no idea of what was happening in the world — not a flicker. The idea came to me that school children needed a paper of their own, especially written, so they could read it,” Johnson said.
In 1927, Eleanor Johnson met William C. Blakey, the publisher of a newspaper called “Current Events,” which was used in many high schools.
“I told him of my idea for a children’s newspaper in grades one to six,” continued Miss Johnson. “Then in August 1928, a telegram came from Mr. Blakey. It said, ‘Save Sunday. Ready to start your children’s newspaper.’ ”
“I wasn’t quite sure ‘My Weekly Reader’ would make a go of it, whether it would succeed,” she said. “However, the American Education Press sent editors on weekends, and I trained them and helped to write ‘My Weekly Reader’ until 1934 when I went with them permanently as their editor-in-chief.”
Miss Johnson served as editor-in-chief until 1971, and after that continued as a consultant.
Johnson, a Frederick, Md., native, was the director of elementary schools in York from 1926 to 1930. From 1930 to 1934, she served as the assistant superintendent of schools in charge of curriculum at Lakewood, Ohio. She co-authored four books and wrote 50 or more workbooks in arithmetic, reading and geography.
“I spent every spare moment I had at night keeping up with the very best magazines,” Johnson said, “and I was in touch with the universities where I worked and the research that was going on there. Without this background, I could have never conceived of ‘My Weekly Reader’ and brought it into being.”