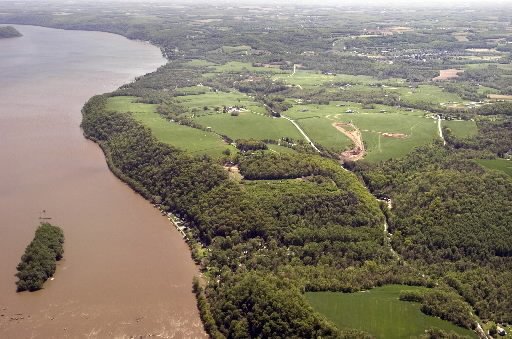 Peaceful Lauxmont, site of much controversy, overlooks the Susquehanna.

Is Lauxmont pronounced “low” or “lox?”
And is there a link between the Kohrs who own Lauxmont Farms and those ubiquitous frozen custard stands on the boardwalk?
And where did Lauxmont rank among largest farms in York County?
The plan to convert Lauxmont Farms into a county park attracts controversy and questions of greater weight than these.
But in sifting through mountains of complex documents and interviews for their current series on Lauxmont, York Daily Record/Sunday News reporters Teresa Boeckel and Tom Joyce put forth answers, excerpted here, to light-weight but intriguing questions that have popped up over the months:

— Kohr Bros. Frozen Custard business was started by the grandfather and great-uncles of current owner Ron Kohr Jr. and his siblings. His father, the late Ron Kohr Sr., had worked for the ice cream business. An uncle now runs Kohr Bros. Frozen Custard. Ron Kohr Sr. traded his interest in the ice cream business for the family farm in Manchester Township, his son said. Ron Kohr Sr. raised cattle and opened a steak restaurant in Philadelphia. That cattle operation would lead him to buy Lauxmont Farms in 1973.
— You don’t pronounce the “x” in “faux pas” or in “Sioux.” And you don’t pronounce it in “Lauxmont.” Well, maybe you do if you live close to Lauxmont Farms, which is located in Lower Windsor Township. According to Wrightsville resident Edward Massa, 85, a lot of people in the vicinity pronounce it “Loxmont.” That might make sense, in light of the fact that the farm’s founder was York County industrialist S. Forry Laucks. Massa used to work on the farm when Laucks was in charge. Even back then, a lot of people pronounced it “Loxmont.” But the workers knew that the correct pronunciation was “Lowmont,” Massa said. And that appears to remain the official pronunciation, based on its use by Lauxmont’s owners and by county officials.
— In 1989, Lauxmont Farms consisted of 1,379 acres. It was considered to be the largest undeveloped piece of contiguous real estate in York County, according to court documents. It consisted of 14 separate farm complexes. It included a French-style, 7,394-square-foot mansion. There were also 13 single-family dwellings, five bank barns and 28 various outbuildings. Now that nearly 600 acres have been sold off, Lauxmont Farms no longer holds the distinction of being the county’s largest undeveloped parcel of land. The Keesey Farm Limited Partnership in Hellam Township consists of 803 acres, and the Heindel Family Farms in Chanceford Township boasts of 830 acres. The main parcel of Lauxmont Farms consists of slightly more than 750 acres.