York countians fought culture and language wars through most of the 19th century.
That was probably not surprising to many people who know that the Pennsylvania Dutch language vs. English debate encompassed homes, schools, churches and communities.
German speakers gradually died off, although some people alive today in York County can speak the dialect.
But what might surprise some is that the debate through the first quarter of the 20th century, as I detailed in a recent York Sunday News column, Language wars nothing new
… . 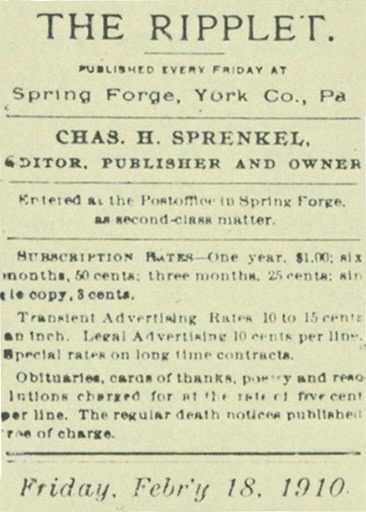 The Ripplet, a Spring Grove newspaper and the Historical Ripplet, a present-day newsletter issued by the Spring Grove Historical Preservation Society, provided ample material to frame the debate.
In researching “Never to be Forgotten”, I ran across newspaper accounts of a language battle involving York’s St. John Lutheran Church.
The use of English in one of the Sunday morning services at the church caused opponents to file a lawsuit in the early 1900s.
The litigation suggested, probably with accuracy, that English services would lead to eventual elimination of German services. Further, the use of English violated the congregational charter.
Some members of the congregation fixed that, changing the charter and resuming English services.
In 1922, 31 members who opposed the change responded.
They formed a new congregation in York known as Good Shepherd Lutheran Church.
That was less than 100 years ago.
(Newspaper clippings found in
“The Spring Grove Years, 1882-1982.”)