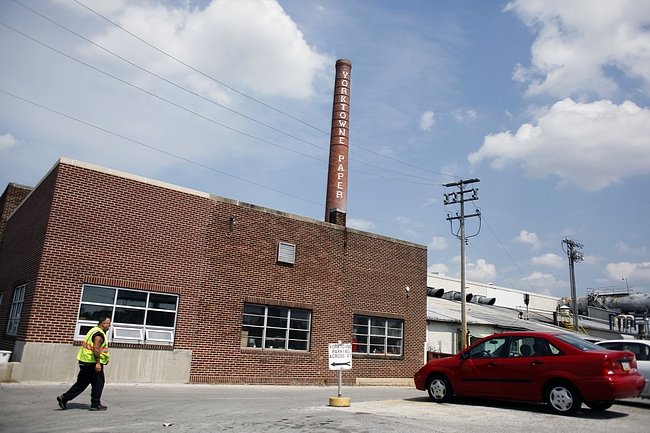 Yorktowne Paperboard may soon reopen. The longtime business, which closed about a year ago, is  easily located because of its smokestack bearing the company’s name visible along Interstate 83. In fact, the smokestack along the Codorus Creek is visible from all the ramps and roads in the area of  the Route 30 and Interstate 83 intersection.  How one spot tells much about what is going on in York County.

Smokestacks have been in the news recently.

The old stacks at New York Wire in Mount Wolf and Foust Distillery in Foustown came down last year.

The communications equipment atop the old Met Ed power plant smokestack along West Philadelphia Street in York recently was updated, pointing to reuse of the old tower.

Another visible smokestack – the tall Yorktowne Paper stack along Interstate 83 – also made the news.

Developer Matt Bupp is working to form a joint venture to reopen the Yorktowne Paperboard plant, which sits on the Spring Garden/Springettsbury Township line, according to a ydr.com story:  Local businessman may reopen the former Yorktowne Paper Mills.

Smokestacks, of course, often are used as a symbol of past heavy manufacturing. When they come down, they point to an economy that has changed. When they remain standing – in the case of using the old power plant’s stack as a type of antennae – they often point to reuse and the information age.

The Yorktowne Paper smokestack, which went up circa 1945,  is a being a bit of a contrarian  because it’s  a smokestack at an industrial site – maybe a soon-to-be operating industrial site.

As an aside, it’s interesting that a smokestack property is looking to a rebirth at a time that another legacy property – the old house for the  Spring Valley Peacock Farm just south along Interstate 83 – came down.

I guess this means that not every property can be saved, and it’s up to far-sighted investors to see an opportunity in our old buildings. Matt Bupp obviously sees such value in the Yorktowne Paper smokestack property. York County, an old county with a healthy inventory of old buildings, needs developers with such vision.

Let’s hope that the Yorktowne Paper smokestack defies the odds of its kinsmen stacks and stands to greet motorists for five more decades.