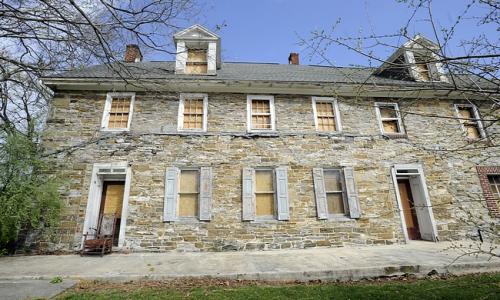 The Hoke farmhouse sits at the traffic circle in Spring Grove. It was there in the 1700s to greet settlers moving south and west along the Monocacy Road. But there’s a question how long it will stand. Spring Grove officials and Rutter’s store reps are discussing what to do with the old stone structure. Rutter’s owns the house and the land. Some people remember the old house as Spring Grove’s library, removed to a nearby location in 1992. One option is out – moving the house. ‘That’s a huge house. Where would you move it to?’ Mayor Delores Aumen said. For more, check out: Spring Grove farmhouse. Suggestions? Comment below. Also of interest: Spring Grove Smith’s Bluebird Bakery baseball team: A band of York County brothers and First car sold at Marley Gross in Spring Grove: Traded it back from the original owner

So York’s Continental Square is getting a facelift.

This is a summary of the changes from Jane Conover, York County Community Foundation, from a York Daily Record/Sunday News story:

“The biggest priority for the project will be creating a more usable public gathering space on the square, Conover said. For that reason, organizers want to tackle projects that will allow more seating and room to perform. Tables and chairs will likely be added, she said.”

Work is expected to begin this summer.

The square formerly was known as Centre Square. When did it change? Check out this York Town Square post.

TV/Radio alphabet soup: A local story out there now is the dispute between Local DirecTV and Fox43, call letters WPMT.  So what do WPMT’s call letters stand for? We handled this with a York Town Square post several years ago.

April 1 is gone: Thanks heavens. This one makes you curl your toes – why do fiction in a non-fiction medium: 8 classic newspaper April fools hoaxes.

Yorkblog post of the day: Best of blogs for last week courtesy of Buffy’s World  – Memories of Roller Rink and Playland to beer trail to historical photos of York County.

To learn more: Check out Joan Concilio’s Only in York County for info on these topics: