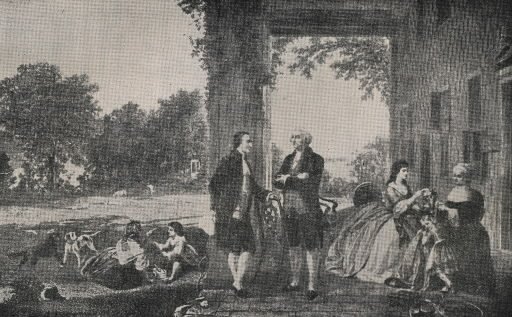 George Washington and Marquis de Lafayette meet at Mount Vernon sometime after the American Revolution, the war that brought the two friends together. The young Lafayette brought the possibility of France’s support to Washington and the patriots during the darkest days of the Revolutionary War. Both men were in York, Pa., at different times. Lafayette during the Revolution; Washington twice while serving as U.S. president in the 1790s. This drawing comes from Bertha E. Bush’s 1912 “Lafayette.” Also of interest: The murals of the Lafayette Club.

First, we learn that Susquehanna Real Estate is purchasing the Lafayette Club on East Market Street and is leasing it back to the private organization.

That gets the Lafayette Club out of the real estate business, but what a wonderful piece of real estate that is. It’s the former home of P.A. Small, one of the most influential York countians of the 19th century.

Then a reader loaned me a copy of  “Lafayette,” a booklet about the French nobleman who aided the American cause in the American Revolution and whose name graces the Lafayette Club.

The booklet, used for student instructional purposes 100 years ago, is a fun read painting a warm picture of the war hero Lafayette.

But it’s revealing in one respect. It does not mention the Marquis de Lafayette’s visit to York to garner support for his campaign into Canada in 1777-78.

No wonder York, America’s capital for nine-months in the Valley Forge winter of 1777-78, has never gained a foothold as an integral part of the American Revolution. Students using books such as “Lafayette,” miss that moment, even though France came on board with America while Continental Congress was meeting in York.

Bertha E. Bush’s booklet does record the famous dinner in which Lafayette supported George Washington against Gen. Horatio Gates’ bid for commander in chief of the Continental Army that winter.

“Gentlemen, I perceive that one toast has been omitted, and I now proposed it,” Lafayette said. “Gentlemen, let us drink to the Commander-in-Chief of the American Army.”

“It does our hearts good,” Bush wrote, “to think how Gates and Conway and the others in the secret mush have looked; and, knowing how things turned out, we do not mind now that “that toast was received without cheering.”

But there’s no mention that this important moment occurred in York, believed to be in the Gates House, still standing today on West Market Street.

Fortunately, York remembers Lafayette, by a statue on West Market Street and the Lafayette Club, under new ownership, east on Market Street.

– Check out this painting of the famous toast in the Lafayette Club.