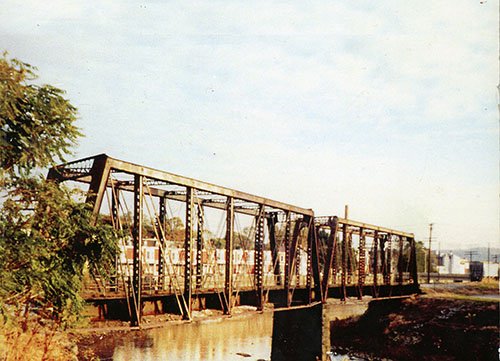 The image of this old railroad bridge came from the cover (see below) of Richard L. Boyd’s 1995 book ‘The Bridge.’  To Dick Boyd, the span represents an important reminder of days in York, Pa., when the relationship of unions and management often was not productive and union organizers met in secrecy under the bridge. (Check out this list of Labor Day 2014 activities in York County). Also of interest:  Dick Boyd’s memoir tells inside story of York workers’ statue and  The Bridge from the air.

Head east on the old railroad line, and you’ll see a bridge that spans the Codorus Creek in York, Pa.

It’s one of those increasingly rare truss types with those overhead support beams and all.

But it’s not the bridge that is historic. It’s what went on under the bridge 80 years ago that is remembered.

Remembered, that is, by some York County workers and particularly by Richard Boyd, longtime labor leader in York County. 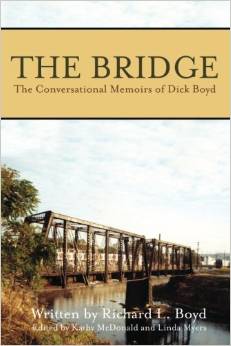 Dick Boyd wrote in his memoirs “The Bridge” (that’s the one over the Codorus) about how as an 8-year-old he accompanied his father to a spot under the span where organizers met to plan a unionization drive against the York County Gas Company.

This was in the 1930s, a time when jobs were scarce and anyone using the word “union” would be blacklisted, Boyd explained in “The Bridge.” So that secluded spot under the span gave the organizers the ability to plan strategy.
+++
The eastern tip of the bridge touches on a redevelopment area that is today called the Northwest Triangle. It’s an area ripe for residential and commercial development.

Eighty years ago, this was a place of labor – lunch pails and hard hats and overalls.

Today, the cleared-off site where the bridge touches the east bank is seen as a place for luxury apartments, movie theaters, and other service providers.

Its occupants will eat lunch at Central Market, carry iPads, and dress in business casual.

York has vastly changed from those years of heavy industry to that of a service economy.

+++
The old bridge today is a link between the old gas company grounds – now an office park – on the west and that triangle of land on the east.

On this Labor Day, the bridge should remind us of the blue collar workers who helped make this region known throughout the world for its “Made in York” products. The span must remind us, too, of the value of the workforce today – whether their shirts are blue or white.

In “The Bridge,” Dick Boyd offered a memorable perspective for Labor Day 2014: “I have met some of the finest people and some of the worst people on both sides of the aisle, labor and management.”

May this day help us strive to be in that first group.

‘The Bridge’ marks the spot along the Codorus 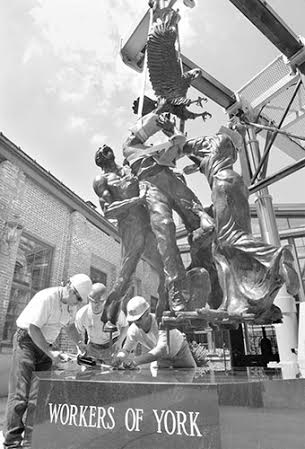 Dick Boyd played a role in the organization of this statue at the Agricultural and Industrial Museum, a Lorann Jacobs creation erected as part of the 250th anniversary of the York County in 1999. Also of interest: Kiwanis Lake, site of Labor Day observances, gained fountains and swans in 1957.