York County’s Dianne Bowders submitted this photo of the Kreutz Creek area in eastern York County. She noted that this Hellam Township site near the Kreutz Creek Presbyterian Church is one of the first settlements of European pioneers west of the Susquehanna. Digges Choice – the Hanover area today – is another such settlement. Also of interest: Absorbing photo and overlay shows locations of six Susquehanna bridgesand Almost … a double deck bridge across the Susquehanna River? and Horn Farm: ‘A very special living history memorial to those hardy ancestors’.

The Bahns, Spykers, Musser and Ruby families are among the pioneering families of York County.
Dianne Bowders, whose camera and pen, are contributing much to understanding York County’s past, provided a photo and information about a historic area and those early families that motorists along Route 30 roll past without a thought. That’s the area the four-lane Route 30 passes through a few miles east of the Galleria Mall and the Wright’s Ferry Bridge over the Susquehanna.
And a good place to stop for a stroll, too.
Dianne provided this information: …

William Penn initially deemed the River a dividing point in his great experiment. Indians were granted land west of the Susquehanna and settlers were confined to the eastern side of the River. In 1729, he altered his plan by allowing settlers into what is now York County.
Named for crossing creeks, Kreutz Creek had fertile farmland. Settlers chose this location by the number of black walnut trees, an indication of fertile soil. John and James Hendricks, the first authorized settlers, were issued 1200 acres in 1729. There were prior unauthorized settlers who were referred to as “Maryland Intruders” and who were harshly removed from the area by the infamous Col. Thomas Cressap.
The church was organized before 1745, granted 50 acres, and is one of the oldest churches west of the Susquehanna River. This building is the third church structure on the site. The first was a log building located in the adjacent cemetery, followed by a limestone structure in 1777 located closer to the creek, and this classic brick building in 1860.
The adjacent church cemetery is full, but only a few tombstones remain of these early settlers. Some stones are propped against a fence while others are leaning or broken. Several remnant native stones mark the location of friendly Indians who chose to be buried in the graveyard.
The first burial occurred about 1780. Among those in the cemetery were church members of the Bahn family, Philip and Elizabeth Spycker Gaertner, Jacob and Magdalena Weltzhoffer, Henry Musser, John and Elizabeth Ruby, and others. 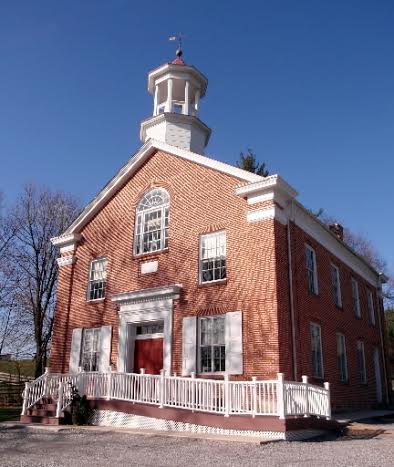