York, Pa. in the 50s: Just try to resist studying this memory-tugging photograph 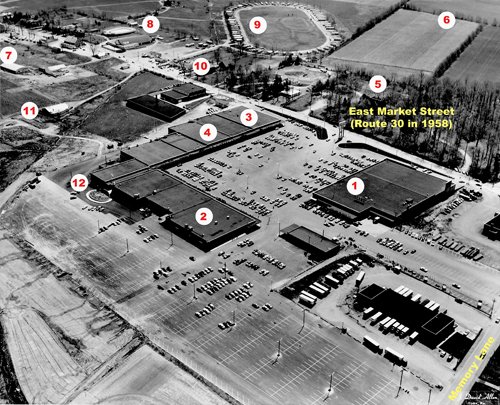 A post-World War II baby boom caused families to spill from York city to form suburbs. The entry of Caterpillar and other industries in the early 1950s also attracted families to that part of Springettsbury Township. These new factories brought in families from out of town, too. And then came the York County Shopping Center in 1956, at 3 o’clock position, to serve families who later lived in Haines Acres, which grew up in the fields, upper right, and beyond. (Photo courtesy of York Buchart Horn and J. David Allen.) Background posts: New book offers astute look into heart of York, York County … ‘A smorgasbord of architectural styles’, Coca-Cola out in Springetts… self-storage space is real thing and Before Geno’s made news in Philly, Gino’s headlined in York.

Gene Schenck of Buchart-Horn Inc./BASCO Associates lent us this irresistible photograph (see enlarged version below).
He was even kind enough to provide a description. I’ve taken the liberty of adding context to the information (in parenthesis), used as part of a company exhibit at the Business Expo in 2005:

Buchart-Horn, Inc./BASCO Associates has taken countless aerial photos during our 60 years in business designing improvements to highways and facilities and providing designs for projects to protect the environment and purify drinking water.
This aerial photo was taken in 1958. It shows what was then called the York County Shopping Center – an area known today as York Marketplace. Here are some of the changes:
– The Sears store was replaced by a new Giant. (Sears opened in 1955.)
– “Joe the Motorist’s Friend” was replaced by Lowe’s and
Office Max.
– The old Food Fair is now Red Lobster and Hollywood Video.
– W.T. Grant’s location became Fashion Bug and Ben Franklin Crafts. (Ben Franklin is in the process of closing.)
– Eastern Boulevard and Northern Way did not exist in 1958.
– Somebody was farming Haines Acres. (Part of Haines Acres, outside of this picture, was then being developed.)
– The Wal-Mart shopping center did not exist. ( The York Mall, where Wal-Mart is now located, opened in 1968.)
– Playland pool and skating rink are visible in the photo. (Playland burned in 1985.)
– A trailer park developed around an old horse racing track. (Gene believes that Eddie Herr, a local beer distributor, owned that property.)
– The former location of Nello Tire is visible and so is a
large house that became part of Barley’s Autumn House.
– The old Valley Canvas building is in the ’58 photo. (That was a building on the York Airport, one of the successors of the original airport, constructed in nearby Fayfield.)
– The Embers Restaurant was around the corner from the
well-known circular fountain. (That’s at 9 o’clock in this photo.)
NOTE: Cars were larger and trucks were smaller.
Change? In York County? You Bet!
York County takes pride in businesses that have been around,
providing jobs for decades. But don’t think things don’t change in York County — there’s been plenty of progress. Just look at this 47-year-old photograph.

Of course, that’s the venerable Lincoln Highway running from 11 o’clock to 3 o’clock, perhaps when it was actually still called the Lincoln Highway. And that stone building on the north side of the Lincoln Highway at 11 o’clock is the equally venerable York Valley Inn, since relocated to become headquarters for Susquehanna Memorial Gardens in York Township.
Any additions or corrections to these descriptions? Comment below.
(For a post with additional information on the growth of the suburbs, see: ‘I still have my memories … of the bustling downtown York business district’.)