John Wilkes Booth bobbleheads should be hunted down and disposed of: Linked in with neat York County history stuff, March 11, 2012 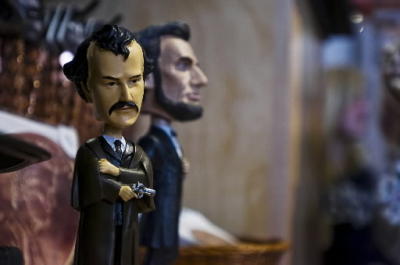 This bobblehead doll of John Wilkes Booth is seen near an Abraham Lincoln doll at the visitors center at the Gettysburg National Military Park. The Hanover Evening Sun found visitors to the visitors center believe the bobblehead of Booth, complete with derringer, trivialized Lincoln’s assassination. One historian weighed in on the sale in the Evening Sun story: “It’s like selling Lee Harvey Oswald stuffed dolls at the Kennedy Center.” That analogy, and other such obvious comparisons, explain why the lives of the bobbleheads should end like that of Booth: They should be tracked down on the shelves in Gettysburg and elsewhere and disposed of. (Actually, they have been since this was posted: Those John Wilkes Booth bobbleheads in Gettysburg? Manhunt ends. Also of interest: John Wilkes Booth gave color to Bland’s boarding school in York

Springettsbury Township’s Schultz House, one of York County’s oldest, is up for sale. Historic York has rehabbed the mid-1700s house near Camp Security and has placed it on the market.

In a Facebook comment on a York Daily Record/Sunday News story about the sale, York City Councilman Michael Helfrich, himself a purchaser of an important house from Historic York, explains how the preservation agency works:

“They are a non-profit org. that saves historic properties, fixes them up, then sells them back to the public with easements that require the owner to maintain the historic character. This is how I got my house, the Cookes House, built in 1761. In the 1950’s the City of York wanted to demolish my house, which oral history says was the house that Thomas Paine stayed in and the farm where the Delegates of Congress kept their horses during the harsh winter of 1777-78. Anyhow, citizens got together back in the 1950’s and formed what eventually became Historic York.”

You don’t read this every day: Lost antique sword turns up in New Oxford.

Pick New Salem: Blake Stough tweeted his pick for the American Pickers who are seeking antique collections in Pennsylvania to pick for their reality show: “The junk store in New Salem would be great for @americanpicker. It’s my favorite place to find local ‘stuff.’ ” Other York County picks?

Forum of the day: Weigh in about the John Wilkes Booth bobbleheads in Gettysburg on The Exchange. 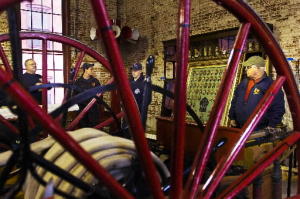