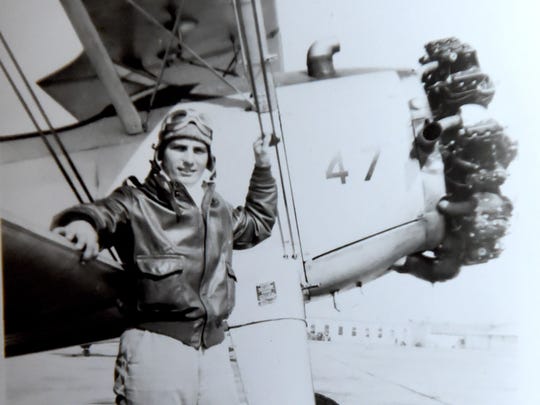 Lt. John Murphy, of Delta, disappeared after parachuting into Eastern Germany in April 1945, after his plane went down. He landed safely but he three others from his crew were never found after they were apprehended by Germans. (York Daily Record, submitted).
Posted by Jim McClureJuly 1, 2019 American Revolution, Archives, all posts, Explanations/controversy, People, War, World War II

My group was talking with curator Ruth Ann Robinson about Lt. John Stewart Murphy as we were finishing our late-June tour of Delta’s Old Line Museum.

There was a lot to talk about. Lt. Murphy’s life and death can teach us about the cost of freedom and many other lessons about America’s past and present.

Murphy, described as movie-star handsome, was born in 1923 and raised in Delta. When World War II came, he was drafted and landed in the Army Air Corps, navigator of a Flying Fortress.

On April 10, 1945 – in the waning days of the war in Europe – Murphy with eight others bailed from their damaged B-17 over East Germany.

He and the others landed safely near Beckendorf, no small feat. But as a group responsible for bombing this region, they still were far from safe.

The Germans, indeed, captured them and divided them into two groups.

Even as Allied forces were approaching town, Murphy and three of his squad members were never seen again.

His sacrifice to protect our freedoms in this two-front war is equal to the courage of our founders with their pens – Americans wielding muskets and those toiling on the home front on July 4, 1776.

That’s a moment that we call Independence Day, when America declared it was no longer under the tyranny of British rule.

When John Murphy boarded his bomber, he knew the mortality rate of airmen was as high as the sky that he would soon navigate. He knew he might not come back.

Likewise, when America’s founders adopted and then later inked the Declaration of Independence, they knew they were potentially signing their death warrant.

A quote attributed to Benjamin Franklin called for unity in the newly minted United States against the British: “We must, indeed, all hang together, or assuredly we shall all hang separately.”

A constitution, the Articles of Confederation, stood as the next step in the quest for independence.

In the heat of discussion on that framework of government, adopted in York about 16 months later, New Jersey’s Abraham Clark put the threat on their lives as traitors another way: “We must apply for Pardons (from the British), if We dont confederate.”

The story of another freedom fighter

This discussion with Ruth Ann Robinson at the Old Line Museum about World War II and the sacrifice of John Murphy made me think of a member of our group.

The 93-year-old had taken a seat as we stood near the doorway of the old bank building, no doubt a bit weary after the museum tour.

He was a contemporary of Murphy in uniform.

When the Delta airman’s B-17 took off on its bombing raid, this fighting man was on the other side of the world soldiering in an invasion against another enemy, part of the ground assault on the remote Japanese-held island of Okinawa.

His mortar unit was set up on an exposed hillside, manning a makeshift emplacement to lob shells that would provide cover for his advancing infantry comrades.

But hellfire rained down on the mortar squad. And not from Japanese guns.

The firestorm came from white phosphorous shells fired from the rear, from friendly guns, intended to provide a smokescreen for infantry climbing the next hill.

The semi-solid white phosphorous sprayed over the soldier, immediately burning and smoking on contact. It covered part of the soldier’s face, hands, legs and back.

The soldier and the rest of his squad, all burned, were evacuated to a field hospital, 5 miles behind the lines.

That night, “kamicraze” pilots, as soldiers called them, targeted ships in the harbor of Okinawa. Some were shot down, others found their marks. At times, the soldier took cover in caves that served as tombs for the Okinawans.

The wounds healed slowly, but he was able to return to his unit at Cebu in the Philippines. It was August, and the war was just over.

Only about 20 percent of his original company was there in Cebu. Most had been killed in action on Okinawa.

“I believe the Lord had a hand in this,” he later wrote, “and I have thanked him many times since.”

That vet, seated there in John Murphy’s hometown, is my father, Robert McClure

Robinson, hearing this story, shook his hand and thanked him for his service.

The cost of freedom illustrated

Right there, I thought, is the cost of freedom that we’re enjoying today, freedom gained by the courage of those who operated in the hall of Congress and the home and war fronts in the Revolutionary War.

And the freedom preserved by Allied forces in World War II.

Robert McClure recovered from his wounds and went on to become an exemplar of the Greatest Generation, involved in his community and church, the patriarch of a large family and with the fortune that day to tour the hometown of a hero who never came back.

Murphy would never get the chance to contribute to a nation that he helped keep free.

The cost of freedom, indeed.

Helen Murphy, John’s mother, never gave up the search to find what happened to her son.

She read about the war and talked to men who knew her son. But she died in 1981, without discovery.

In Europe, grateful citizens sometimes take up such searches for the remains of downed servicemen.

Enrico Schwartz is one of them.

He thinks of the captured Murphy, feeling safe, hearing the approaching American troops in the distance, believing he’d be sent home to his family when the town was liberated.

But they were unaware there were four more nearby.

Back in Delta, a Veterans of Foreign Wars post named after Murphy operated for many years but closed in 2017.

But all of us today – Independence Day – have an opportunity to ponder the cost of freedom and to remember John S. Murphy and the countless others who risked or gave their lives to gain and maintain the freedoms we enjoy today.