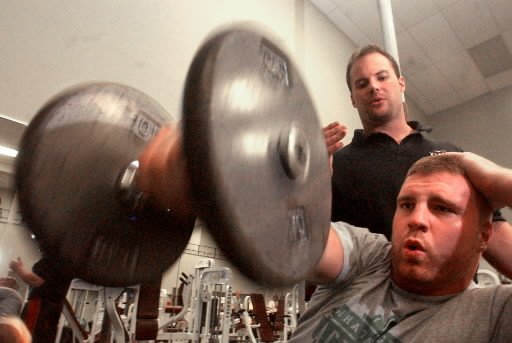 John Kuhn, right, works out at Leader Health & Fitness in 2005. Kuhn is a Dover High and Shippensburg graduate. After a stint with the Pittsburgh Steelers, the back now plays for the Green Bay Packers. (See additional photo below.) Background posts on other Dover achievers: Wiest’s first store: ‘Segars’ 5 cents a grab and Olympic gold medalist Scott Strausbaugh another Dover product.
Add NFLer John Kuhn to the list of achievers from Dover.
Kuhn made it to the Super Bowl as part of the Steelers practice squad in 2006. He was the second York countian to play as a back for the Steelers in recent years following Eastern York High School grad Jon Witman… . 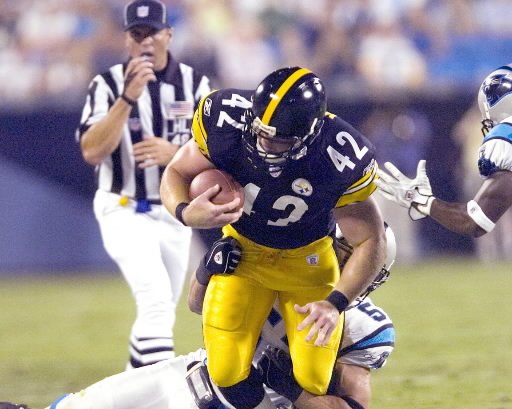 John Kuhn rushes for the Pittsburgh Steelers in 2006. In his collegiate days at Shippensburg University, he held 27 school records and six PSAC marks. He ended his Ship playing days with 4,685 yards rushing, 53 touchdowns, 5,300 all-purpose yards and 26 games with at least 100 yards rushing.
“It’s the Super Bowl. It’s everyone’s dream,” he said before that game. “And I like to believe that I helped (the Steelers) to be a part of all this.”
Kuhn now plays for the Green Bay Packers, a Super Bowl contender this year.
A York Daily Record/Sunday News story about the Dover Area High School grad assessing the upcoming 2006 Super Bowl follows:

The early stages of John Kuhn’s NFL career have all the makings of a classic underdog story.
Now all we have to do is wait for the fairy-tale ending.
Kuhn, a running back on the Pittsburgh Steelers practice squad, and his teammates will touch down Monday in Detroit, where the team will get ready for next Sunday’s matchup against the Seattle Seahawks in Super Bowl XL.
All in all, not a bad gig for a young man who is just 14 months removed from the campus of Shippensburg University.
“You know, sometimes I stop, look around and I wonder, ‘How did I get here?'” Kuhn said
Kuhn’s path to the Super Bowl began at Dover Area High School, then proceeded west to Shippensburg, where the fullback excelled on the field and in the classroom. He finished his collegiate career with 4,685 yards rushing and 53 touchdowns, both school records, and graduated with a 3.3 grade-point average in chemistry.
Kuhn went undrafted in the NFL draft, but on April 25, he signed with the Steelers as a free agent.
He survived on the roster until the final cut. Released by Pittsburgh Sept. 3, he agreed to a three-year deal with the San Jose Sabercats of the Arena Football League.
“I spoke with a few other NFL teams,” Kuhn said, “but at the time, the Arena League seemed like the best option for me.”
Then, on Dec. 2, the call came.
Just three hours before his flight was to depart for the West Coast, Kuhn and his agent, Kip Washington, received a phone call from the Steelers. Later that day, Kuhn was added to Pittsburgh’s practice squad.
“It was God’s will,” Washington said later.
“It was a hectic three months,” Kuhn said. “I mean, it was a roller-coaster ride. Within 90 days, I had been released by the Steelers, signed a contract with San Jose, and now suddenly I’m back in Pittsburgh.”
Three days later, the Sabercats placed Kuhn on their “Other League Exempt” list.
“The Arena League is a cousin of the NFL,” Kuhn said, “and they have an exemption for the higher league, so there was nothing keeping me from going back to the Steelers.”
Practice squads are limited to eight players per NFL team. The practice squads have two primary objectives — to provide depth to help the team weather injuries, and to get developmental time for unproven players with potential.
“This has been a great experience,” Kuhn said. “And at the same time, (it) provides me with a golden opportunity. It gives me a chance to show what I can do on a daily basis, and that I can take the wear and tear of a season. And, most importantly, it gives me an opportunity to help my team win.
“It definitely is a building block for the future.”
Kuhn has spent the past two months gaining experience so he can improve as a player and eventually secure a spot on the Steelers’ active roster. Whether it’s on the field or with his nose stuck inside a playbook, Kuhn is always trying to better himself, always working to get his shot.
“Aside from his physical attributes, John is such an intelligent individual,” Washington said. “He is able to grasp things very quickly. That is a big reason he’s where he’s at today.”
As a practice squad player, Kuhn is part of Pittsburgh’s “scout team,” which runs the upcoming opponent’s offense against the Steelers’ defense during practice. Kuhn could be playing the part of Seattle’s standout fullback, Mack Strong, during practices leading up to the Super Bowl.
Kuhn will not play in Super Bowl XL; he will not even suit up. The practice squad will watch the game from either the sideline or, more likely, from a luxury box inside Detroit’s Ford Field.
But none of that really matters to Kuhn.
“It’s the Super Bowl. It’s everyone’s dream,” he said. “And I like to believe that I helped (the Steelers) to be a part of all this.”
For Super Bowl XL, the Steelers’ story lines are almost unbelievable — Jerome Bettis going home to Detroit to play in a Super Bowl, coach Bill Cowher getting another shot for a championship ring, the franchise looking for its fifth (“one for the thumb”) Super Bowl title.
And a kid from Dover High getting to live out a lifelong dream.
Chronology
• Nov. 20, 2004: In John Kuhn’s final game as a Red Raider, West Chester defeats Shippensburg University, 33-28, in the NCAA Division II playoffs.
• Jan. 7, 2005: Rushes for 14 yards as the East beats the West in the NCAA Division II Cactus Bowl.
• April 23-24: Goes undrafted in the NFL draft.
• April 25: Signs free-agent contract with Pittsburgh Steelers.
• Aug. 15: Catches 3-yard pass from Brian St. Pierre for first professional touchdown as the Steelers defeat Philadelphia, 38-31, in a preseason game.
• Sept. 3: Released by Steelers.
• Oct. 11: Signs three-year deal with the San Jose Sabercats of the Arena Football League.
• Dec. 2: Signed to Steelers’ practice squad.
• Dec. 12, 2005: Placed on “Other League Exempt” list by Sabercats.
• Feb. 5, 2006: Becomes second Shippensburg University player to go to the Super Bowl as part of an NFL franchise (Rob Davis of the Green Bay Packers was the first).