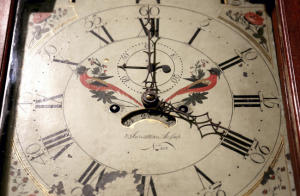 John J. Snyder Jr. collected a hall-of-fame lineup of tall case clocks in his day. The works of John Fisher, Godfrey Lenhart and Jacob Hostetter, all clockmakers with York County connections, are part of that collection. Now, 14 grandfather clocks from the Snyder collection are on display at the York County Heritage Trust, 250 E. Market St. a York, Pa., Daily Record story on the exhibit noted that many dealers collect 10 to 20 such clocks. Snyder collected hundreds. The clocks are works of art and loaded with history. ‘A simple design can tell you a lot,’ the Trust’s Dan Roe told the YDR. This clock’s face bears hand-painted birds. It comes from the hands of another York County hall-of-fame craftsman and inventor Jonathan Jessop. Check out this photo gallery about the exhibit: ‘A Timeless Collection.’ Also of interest: Many have seen this clock tower, but can you locate it?

+++    The Zimmerman Center in Lower Windsor Township is unveiling a waterside pavilion, a walkway along the Susquehanna River with interpretative signs and a walk to the site of the last village and burial grounds of the Susquehannock Indians. Check out: Long Level.

John Henry Denig remembered: Medal of Honor recipient Sgt. John Henry Denig will be commemorated this weekend on the 150th Anniversary of the Battle of Mobile Bay. Denig was recognized for his heroism in that battle.

History mystery: Click on the ‘goo.gl’ link to see three images of the same car – when it was in service, in ruins and now restored.