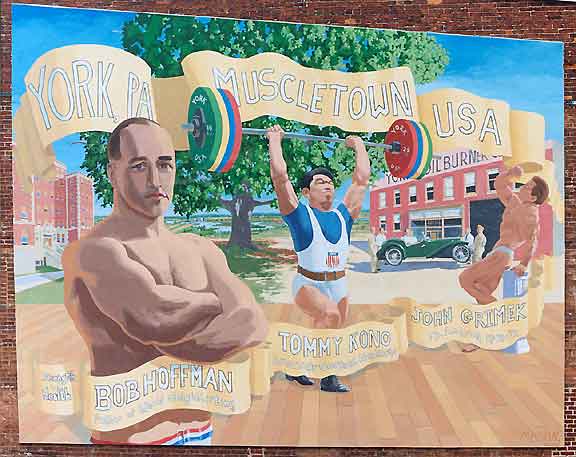 This panel, part of the Murals of York series, features two York-based Olympic weightlifters, Tommy Kono, center, and John Grimek, right. That’s York Barbell’s Bob Hoffman, four-time Olympic coach, at left.
Angela Grimek’s grandchildren want to recognize their grandmother’s June 24 birthday.
The wife of the late Mr. America and Mr. USA weightlifter John Grimek is turning 90.
This is a reminder that York County is not long past those days when it billed itself as Muscletown USA.
John Grimek was among the most successful of the musclemen training under the tutelage of Bob Hoffman, founder of York Barbell Co…. .

“Never to be Forgotten” included a weight lifting magazine’s appraisal of the two-time Mr. America John Grimek: “Grimek put to rest the idea that men who trained with weights were ‘muscle bound’ and unable to perform well athletically. His legendary posing routines, lasting more than thirty minutes, involved an extraordinary degree of strength, flexibility and coordination.” And for a photo of a young John Grimek, see Author muscles way into York’s weightlifting, bodybuilding world.
Grimek, who died in 1998, will long be remembered in York. Among other things, he’s a big part of the Muscletown USA mural (see above).
Happy birthday, Mrs. Grimek!