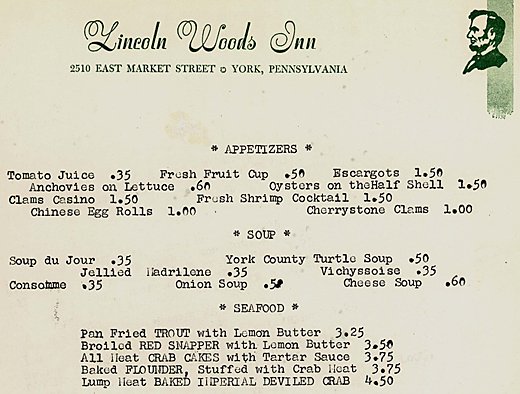 Stephen H. Smith supplied this portion of a 1960s daily insert menu from The Lincoln Woods Inn. The eatery stood back from East Market across from the York County Shopping Center. It is known as Fat Daddy’s today. Smith contrasted the prices on the menus versus the fact that nearby Gino’s was selling hamburgers for 15 cents each.  In 1960, it has a famous visitor, presidential candidate John F. Kennedy. Also of interest: JFK joined TR as U.S. presidents who visited YF.

Stephen H. Smith is looking for photographs of children waving to John F. Kennedy’s motorcade as it passed North Hills Elementary School on its way to the York Fair in 1960.

How Kennedy came to roll by the school is explained in Smith’s narrative of that day when the future president came to town on a campaign visit:

“I received my eBay purchase of this 1960s menu from the Lincoln Woods Inn the day following my response to Joan Concilio’s recent blog Only in York concerning a Jim Goodling photo of the Gulf Service Station with the North Hills Elementary School in the background. These two seemingly unrelated items caused me to reminiscence and do a little research.

“The Lincoln Woods Inn was originally a horse stable for the nearby horse race track owned by Mahlon Haines. I discovered that the stable was converted into The Lincoln Woods Supper Club about 1953 and then became the Lincoln Woods Inn about 1956. Senator John F. Kennedy stopped at the Lincoln Woods Inn for lunch on September 16, 1960 between campaign stops in Lancaster Square and the York Fairgrounds. The Lowell Sun reported in their September 19, 1960 issue, ‘Kennedy asked to see Richard F. Griffith the enterprising man who built the place from an old stable in the woods along Lincoln highway. “If everybody did his job as well as you did, this country would be in lots better shape,” Kennedy said to him with great warmth.’  ”

“Here is the connection with North Hills Elementary School. After the lunch stop, Kennedy’s motorcade preceded onto the two-lane Whiteford Road, which becomes Arsenal Road; eventually arriving at the Fairgrounds. I was in 5th grade at North Hills Elementary School at the time; the teachers had all the students lined up single file along the Whiteford Road side of the school grounds to wave as the motorcade passed by. I wonder if any photographs of the children waving to the motorcade exist?” 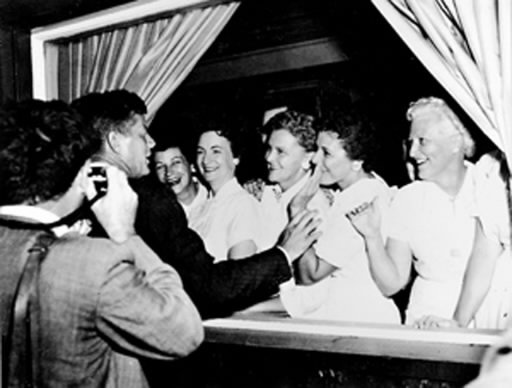