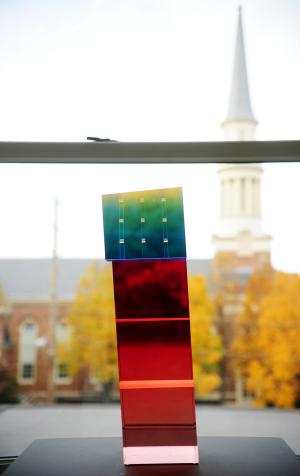 This Preservation and the Arts fundraiser benefits  Historic York and the Pennsylvania Arts Experience. And it shows off the work of 35 local and regional artists, including this glass piece by Cliff Maier (that’s St. Paul’s Lutheran Church in the background). Visitors to this weekend’s held-over exhibit will get another treat. This is where preservation comes in. They’ll see the refurbished John C. Schmidt Mansion, built circa 1890. The Dempwolfs, the noted York, Pa., architectural firm, designed the 900 S. George St. Schmidt house. Details: York Art exhibit fundraiser extended because of popularity.This large exhibit is evidence of a growing regional arts presence. Also of interest: It is time for a York County Arts & Entertainment Hall of Fame.

And she’s a journalist in L.A., who sent us this email:

“Back in the 1930’s, Don Hershner was a star player on the football team at York High School. Now his daughter has written an article about the stadium that the City Council has approved for the City of Los Angeles.”

She provided a link to her work: Major Addition Planned for Downtown Area of Los Angeles.

I asked for a bit more information on Sue and her family.

She is the older of Donald and Dorothy Hershner’s two daughters.

“My parents graduated from York High School in the second half of the 1930’s,” she wrote. “They were married on September 5, 1942, just before my father began his journey overseas, as an officer in the U.S. Marine Corps. In June of 1942 Don Hershner had graduated from Catawba College in Salisbury, NC, where he had been offered a football scholarship.”

Sue graduated from Mount Holyoke College and earned a graduate degree from the University of Texas Graduate School of Biomedical Research.

“I had viewed writing as a hobby until March of 2003,” the L.A. resident wrote, “when I launched my career as a freelance writer.”

Supposedly isolated York County does link up with people and events all over the globe.

Blog post of the day: This post from Yorkblogger John Hilton catches up readers on a trend by some Presbyterian congregations in York County – historic Guinston in this case – to leave the mainline Presbyterian Church because of concerns over a growing liberalism.

Forum of the day, I: 35 artists are displaying their craft this weekend at historic 900 S. George:  Do you like what is happening in the growing local art scene? Please comment below. Background: Pittsburgh, Pa., has The Warhol. Can York, Pa., secure The Jeff Koons?

Forum of the day, II: Exchangers are discussing why York County needs another hamburger joint, tied to news that Red Robin in coming here. How would you answer that? Comment below.