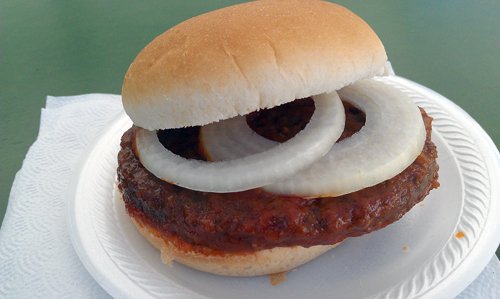 This is a Bury’s hamburger, specifically from Johnny Eagle’s booth at the York Fair. Notice the distinctive tomato sauce, whose ingredients are reportedly secret, although the recipe has been published in the York Sunday News and on this blog. And notice the onion topping it all off. (See photographs of the two stands selling Bury’s burgers below.) Also of interest: Bury burgers beat out Big Mac as first fast-food eatery in Downtown York.

OK, the fair’s last day is the last day you can get its best fare of the culinary kind – Bury’s burgers.

Each fair, I sample a burger from each stand. Each year, I come to the same conclusion: It’s a dead heat. Both are wonderful.

I never tasted a Bury’s burger from one of Joe Bury’s long-closed chain of stands, so I’m at a disadvantage to know how they compare to the original.

But you’ll have trouble telling those offered at York Fair apart.

And you’ll have an option of getting the burger topped with an onion.

Go with the onion. Its crunch counterbalances the scrumptiously soft burger. 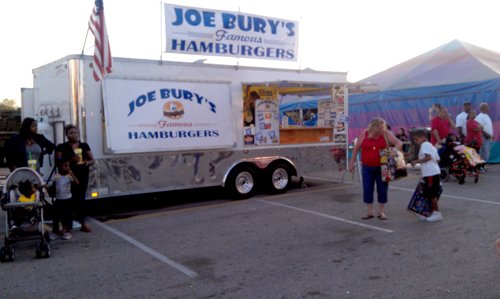 The stand for Joe Bury’s Famous Hamburgers is selling its delicious fare on Grandstand Boulevard, the aisle paralleling the grandstand. The stand sells burgers all year at various locations. Those sites are listed on the stand’s Facebook page.

Also of interest:
– Back when Gino’s was the York-area place to go and Baltimore Colts was the team to root for

– To read stroll back memory lane, see posts in Nostalgia and Memories category. 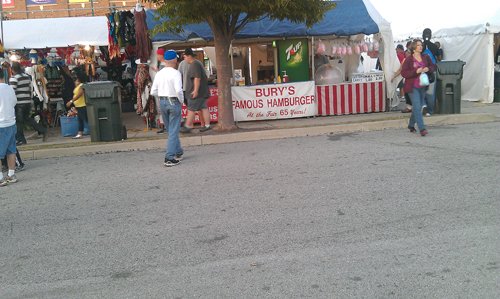 Johnny Eagle’s booth, with Bury’s Famous Hamburgers, is located across from the fire station at the York Fair. Bury’s burgers have been available there for years.