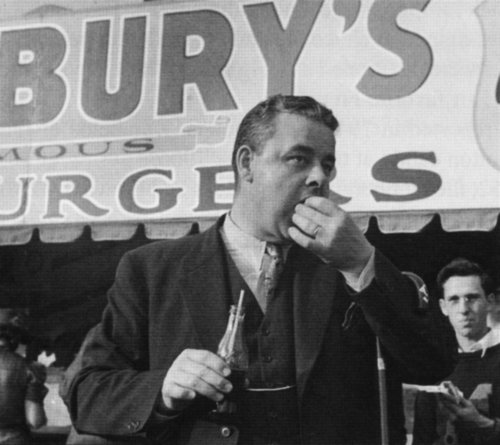 A York Fair patron enjoys a Bury’s hamburger outside the iconic restaurant chain’s stand. Dave Gulden wrote in his book ‘York Fair: Family Fun Since 1765:’ ‘Hotdogs were abundant at the 1943 Fair. But the local hamburger baron, Joe Bury, spoke of the scarcity of good hamburgers due to the lack of quality meat. In 1944 oysters were reported to be at a premium, and by 1945, the burger “famine” was over.’ This year, two stands run by Bury family members are offering their versions of Joe Bury’s secret recipe at the fair. Also of interest: Fair, Bury’s go together like tomato sauce, burgers.

I did one of my regular taste tests of competing Bury’s burger stands at the York Fair Friday.

More about that in a second.

More important is that Yorkblogger June Lloyd weighed in on the topic of which stand produces the tastiest version of the venerable, red-sauce covered hamburgers, offered by a dozen Bury restaurants around York.

“First I had a Bury’s hamburger at the same stand I did last year,” she wrote. “I didn’t check the name, but I assume it is still Johnnie Eagle’s. The burger was good and tender with a tasty sauce. The fries were very good—fresh out of the fryer. A little later, all in the name of scientific experimentation of course, I had a burger at another stand—this one said it was Joe Bury’s original. It cost 50 cents more, but it was thicker and so was the sauce. I liked this one a bit better… ”

That the hand she played, but you’ll have to check why at her Universal York post: York Fair food is still good and the horses are still trotting.

OK, I also took the test.

I concur with June.

And the offerings from both booths are delicious.

But here’s the important thing, as I’ve said before.

My wife’s Bury’s burgers, based on this recipe with her own secret touch, are better.

(For a summary of Mike Argento’s test, visit: Bury’s burgers slathered with that red sauce: It is its own thing).

– Bury’s recipe as published in the York Sunday News, 2000, click here.
– That York Sunday News recipe with additional ingredient reportedly from Joe Bury himself, click here.
– A quick alternative: This Bury’s burger sauce comes from a can, click here.
York Town Square posts on Bury’s Famous Hamburgers:
Yet another Bury’s hamburger drops into the cooker.
Bury’s burgers: ‘You won’t get that recipe’.
The quest for Bury’s secret hamburger recipe continues.
This Bury’s recipe comes from a can,
Reader reveals Bury’s secret recipe.
Is Bury’s secret sauce really secret?
Bury’s burgers: Nostalgia on a bun.
Fair, Bury’s go together like tomato sauce, burgers.
Bury’s burgers: ”That was it – no slaw, no relish, no pickles’.
Playland plays nostalgic note for York countians.
Bury’s burger memories far from buried.
Also of interest:
– Back when Gino’s was the York-area place to go and Baltimore Colts was the team to root for