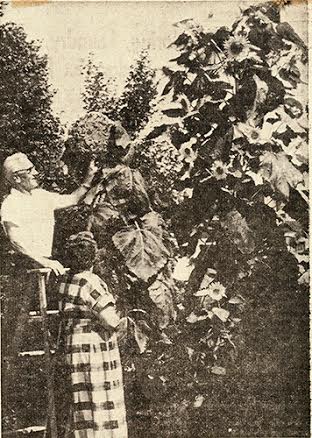 This photo of a giant York, Pa., sunflower came from the camera of Gazette and Daily photographer Carol Innerst. The reporter and photographer worked on the York daily’s staff in the 1960s, before moving on to metropolitan newspapers. By the way, the sunflower, at Grant Hoofnagle’s 910 Roosevelt Ave. home, stood at 13 feet and bore 77 blooms. Also of interest: York Daily Record columnist James A. Hubley: ‘What I prefer is a simple, Jim’ and York Sunday News columnist Mary Stephenson: ‘A rare and magical person with a style all her own.’

I’ve had the good fortune to meet a good many of the journalists who worked on the old Gazette and Daily in the 1960s and 1970s.

Many – Jim Hubley, Lloyd Harris, Eddie Schaeberle – were interesting people when I knew them. They were no doubt among the newsroom characters – with all kinds of quirks and eccentricities – in their day.

Over the years, I have seized the opportunity to chat with journalists from the noted, left-leaning newspaper of J.W. Gitt, such as the other day when Carol McCleary Innerst came into the newsroom for a visit. 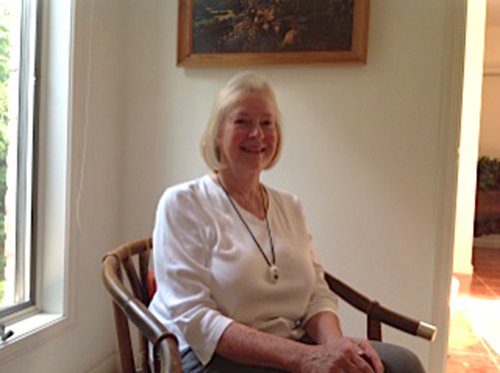 I had met Carol via email in writing about her informative book  ‘York College of Pennsylvania.’

She started working for The Gazette and Daily when a student at York Junior College and joined the York staff after graduating from the University of Maryland.

So here are the types of things two journalists, with a common interest in history, talk about when together:

– The newspaper business leans heavily on mentorship. Working for The Gazette and Daily as a York Junior College student, Carol’s received an early glimpse of this. David Wesley, opinion page editor, served as her kind and helpful mentor in York.

– She went to YJC when it was at College and Duke streets in a beautifully designed Dempwolf building. I later found this description of her YJC experience on the York College website: “From 1941 until 1961, YJC occupied a single, albeit architecturally distinctive  building, dedicated in 1887, with a six-story tower. It was compact (at times crammed), friendly, and gave students an inexpensive, excellent two-year start toward a bachelor’s degree.” The building has been demolished.

– In the 1960s, reporters carried cameras, pulling double duty. I told Carol our reporters do the same. Background: In the late 1970s to the early 2000s, that dual role largely went away. But in the digital age, it has come back and then some. And staff photographers now write.

– Carol reminded me that the Gazette and Daily’s  Dean Gladfelter later moved to the New York Times, where he retired as head of its noted national news copy desk. The Times has two York Daily Record alumni on its staff today – Patrick LaForge and Mike Abrams.

– Those were the days when The Gazette and Daily – and other newspapers – did not credit reporters for stories. The lack of bylines make it difficult for historians to go back to read the work of well-known journalists.

– Carol worked with many of the nationally known journalists at the Gazette and Daily – Robert Maynard, later Pulitzer Prize-winning publisher of the Oakland Tribune, and Art Geiselman, who went on to work for the Evening Sun in Baltimore. Both scored prestigious Nieman Fellowships at Harvard.

“Art got at least a couple of cameras smashed by irate magistrates/police/etc. for just trying to do his job,” Carol wrote  in a later email,  “which usually could be characterized as trying to help underdogs.”

After her Gazette and Daily years, Carol worked at the Allentown Call-Chronicle, Philadelphia Bulletin and Washington Times.

She moved back to York where she freelances on an array of projects.

A thread in our conversation centered on the 1960s Gazette and Daily staff, made up of two groups: Journalists with local roots, who reflected their home county, and those brought in from outside the county by Gitt, reflecting their boss in their left-learning politics.

But those two talented streams came together into a productive staff. That happens in newsrooms when big stories present themselves.

And the 1960s decade – with declining city population, erosion of retail base and the race riots –  was full of big stories in York, Pa.

Check out these stories that tell about the history of The Gazette and Daily, its ancestors and successor.

This is a Carol Innerst-written story about YMCA expansion plans in 1960. The story does not have a byline, as was common on The Gazette and Daily pages. The writer surmised this was her story because she kept the continued portion, known to journalists as the ‘jump.’