Great Balls of Fire, York’s Memorial Park to spin back to 50s 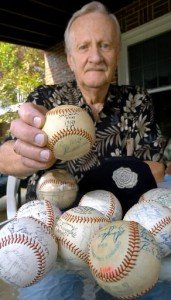 George Trout has many signed baseballs from the York White Roses, prime occupants of stadium in Veterans Memorial Park in the 1950s and 1960. Trout was the public address announcer for the White Roses in 1955. When he couldn’t confirm the Roses’ newest player – a ‘B. Robinson’ – Trout announced ‘Bob Robinson’ as a substitution. Memorial Stadium will always be associated with Brooks Robinson’s professional debut.

York city is planning a “Great Balls of Fire Car & Truck Cruise In” at Veterans Memorial Park later this month.
The event will take a step back into the ’50s, when the city assumed ownership of the park.
When was the park built? …

Men and women were returning from duty in World War II when the York community stepped forward to break ground for the park and stadium, the latter bearing weightlifting guru Bob Hoffman’s name.
After the 1946 groundbreaking, construction took place on the tract – the Stauffer tract – near South Pine Street and Rockdale Avenue. Today, a memorial to those who served their country in uniform marks the park’s entrance.
In the 1950s and 1960s, the White Roses baseball club and the York Roses professional football team played at the stadium.
The park later was positioned as the main site when York vied for the title, “Softball Capital of America,” and remains a prime softball field today.
Early in York’s minor league baseball stadium chase, Memorial Park was eyed as a possible site for the new park. Then-mayor Charlie Robertson also suggested the construction of an amusement park in the 1990s, complete with roller coaster, on that site.
But despite its presence to remember the World War II vets, history will remember the park and stadium best as the field where Brooks Robinson made his professional debut.
A city news release on the Oct. 20 event at the park follows:

A new event presented by York City Recreation & Parks and Presenting Sponsor Apple Automotive Group will be held at Veteran’s Memorial Park, Vander and Rockdale Avenues in the City of York on Saturday, October 20, 2007 from noon to 4:00 P.M.
The “Great Balls of Fire” Car & Truck Cruise In will feature vintage vehicles, music, food, and a great place for families to spend an afternoon at the park.
Vehicles built prior to 1983 can pre-register now through October 10 for $10. The day of event from, 10 a.m. to 12 noon, the registration fee will be $12. Collector dash plaques, goodie bags with area business promotional items plus coupons, and a door prize ticket will be given to the first 300 vehicles registered.
Mayor John Brenner will open the ceremony at 12:15 P.M. and the York County Honor Guard will pay tribute with a salute to our Armed Forces. Non-profit Veteran groups will be participating in the event as well as many other vendors.
During vehicle registration, Bob Rudy of 98.5 will play music of the ’70s. Other entertainment includes Jay King of Jay Bird Entertainment spinning Oldies but Goodies of the ’50s & ’60s from 12:30 P.M. to 4:00 P.M.
Special events of the day include staging of a ’50s Malt Shop with vintage jukebox by Classic Kitchens, display of vehicles by Apple Automotive Group, a pro-engineered ’70 Nova 898 hp which deemed the front cover of Super Chevy, January, 2007 then May, 2007 Super Rod, plus vintage stock cars of 1930,’32,’44 and ’72.
Award presentations will be held at 4 p.m. and include trophies sponsored by Apple Automotive Group for 1″Big Bopper-Best of Show”, 1-50th Anniversary Salute of the ’57 Chevy, and 1- Spectator Choice. The 34-Peoples Choice awards and 1 Plaque representing Veteran Recognition have all been sponsored by area businesses that believe in supporting this worthwhile event.
Families can take part in a Chinese Auction and trivia games from the era. There will be food for sale, auto memorabilia stands, and craft vendors set up throughout the day.
Admission is free to the public and donations are welcomed! All proceeds support the Veterans Memorial Park phase 1 construction plan.