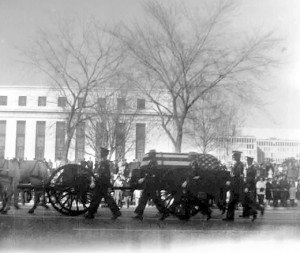 The life and times of John F. Kennedy continues to interests York countians – or former York County, Pa., residents like Ken Rohrbaugh, krohrb7788@aol.com, of Lakewood, Col. ‘Hard to believe 60’s are history – but attached is a copy of photo I took as a 10 Year old – The JFK funeral procession on Constitution Ave in DC 11-25-63.’ It’s interesting that York countians today are interested in JFK. York County voters in 1960 backed Richard M. Nixon over Kennedy. Ken also flagged a website that will interest folks: The Greatest Generations Foundation. He noted his parents were World War II vets. His mom was a WAC sergeant. His father a bombardier Officer on B-17 Crew in Europe. Also of interest: John F. Kennedy lunched on Lincoln Woods Inn’s expensive fare in 1960.

Dick Bono is an architect and an observer of the York County scene.

On the topic of branding – how York County presents itself to the world – he believes the story of York’s origin story is the key.

Everyone knows that York grew from Lancaster County, just as Adams grew out of York County. But specifically the sons, of William Penn in the 1730s saw the county already being settled…but settled with no economic benefit to their proprietorship. It was then…as the boundary with Maryland had just been settled….that they hired a John Cookson …the surveyor who platted out Philadelphia….to survey York Town on the intersection of the Monocacy Trail with the Codorus. Cookson laid out the 400 foot square Philadelphia blocks, alleys…and town center, with 65 foot cutouts at the corners, at today’s Continental Square. This was in 1737…but the fact not to be missed…is that at the same time, he granted land for agriculture, plantations, and the like.

This is key. What is this pattern of development called?

I submit to you that it should be the foundation of “a handle” on York County, which includes ALL the activities that take place, and have taken place here. I think the “handle” for York County promotion should be “Town and Country Living”. Just leave it at that …simple and direct.

My view was Hub + to represent the fact that York is near everything, but has considerable attractions of its own.

A second Last Supper:  Betsy Baird, bambaird@verizon.net, responded to my recent quiz about identifying a lovely sculpture of the Last Supper (at St. Mary’s Roman Catholic Church in York):

“When I saw the heading of this Blog, the only Last Supper marble sculpture that came to my mind is the one in the Susquehanna Memorial Gardens Cemetery on Chestnut Hill Road, York, PA. It is right near Raab’s Orchards, outside Dallastown, PA.”

Blog post of the day: June Lloyd, over at Universal York, previews the opening of a Civil War exhibit on the U.S. Army General Hospital in York: York’s Civil War Hospital Treated Many, Lost Few.

Forum of the day: On Tropical Storm Agnes’ weeklong anniversary, the question arises: What is the probability of another such flood in York? (One observer, Dan Meckley, says statistically high.) Your thoughts? Can another destructive flood like that caused by Agnes hit again? 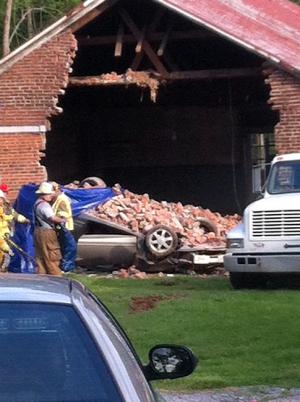 This terrible accident in Monaghan Township recently took a life and destroyed a former school.  The old schools often went up near roads, which have been widened over time. So the hundreds of schools, often only with one room, are damaged or coming down because of such accidents and fire.