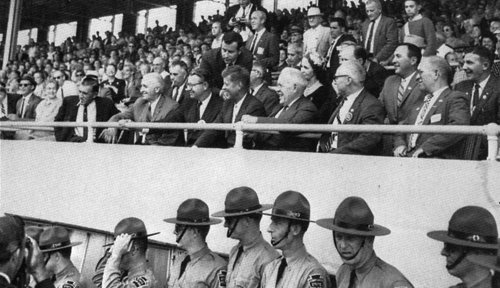 The York County Agricultural Society’s photograph collection shows presidential candidate John F. Kennedy at the 1960 York Fair. Notice the state troopers, who protected JFK, in the foreground. (See another post about JFK’s visit.) Teddy Roosevelt had also visited the fair more than 50 years earlier. Also of interest: Teddy Roosevelt in York: ‘I know York county farmers are prosperous. Their barns are bigger than their houses’.

Russell S. Dumas reponded to a yorktownquare.com post about Arthur Wagenknecht of York,  a member of the 56th Armored Infantry Battalion in World War II.

“Jim, I am the sole survivng son of a member of the 56th who was killed in the Colmar area of France on 4th February, 1945. One of his commendations states that on 4th February, 1945 his Battalion was surrounded and taking heavy enemy fire and casualties. PFC (later Seargent) Russell “Blackie” Dumas advanced in the face of heavy enemy fire to a forward position with his machine gun and remained at his post firing his machine gun, keeping the enemy’s heads down, while his men were able to withdraw to previously dug in positions. He was, however, unable to withdraw and was killed. I would very much like to hear from someone who was there and survived, or someone who knew him during that time.  Thank you for running that article in your blog at a time when I have been diligently searching for a contact. One would assume that after all those years have passed, that healing would be complete. Nothing could be farther from the truth. You see Jim, I was born in April of 1944, and never knew him … in fact I never had a dad. But I have always thought about the men who did survive that day, and hoped that they had full and happy lives and great families. At any rate, I am grateful for all those who did survive and made it home.

He asked that I pass contact info along to Art. That has been done.

Speeches and appearances: People always ask so here are two: Scott Mingus and I will present on “Civil War Voices” at 7 p.m., Monday, at the West Manchester Township Historical Society. I will also speak about Lutheran and St. Peter’s Lutheran Church’s history at that North York church’s Sunday school on Sunday, Sept. 25. For details, call: 717-854-0589

Website of note: The York Fair is wrapping up today, and to pick up news and views and tips about the fair, check out the deep All’s Fair site.

Story of note:  Ydr.com has posted: Love at the York Fair: Romance blossoms amid the fried and the rides. Of course, that’s nothing new. York Fair has been such a place since, well, from the moment of its 1765 founding: York Fair produces affairs to remember

Forum of the day: Exchangers are discussing York County’s nightmare roads and there are plenty of them.