Jefferson Hillclimb: 7 things that might surprise you about this longtime York County motorcycle competition

This crowded scene in York County, Pa., has become common near the Codorus Township of Jefferson. No, these folks weren’t captured via aircraft. The photographer, Paul Kuehnel, was atop a high hill made famous by the event, the Jefferson Hillclimb. See this photo gallery from this year’s events. Also of interest: High climbing in Jefferson.

Seven things to know, some that might be surprising, about the White Rose Motorcycle Club’s Jefferson Hillclimb … .

1. The Jefferson Hillclimb has not always been in Jefferson. The first event was in Glen Rock – on Claude Rohrbaugh’s farm.

2. The Glen Rock land was not big enough for the crowds and parking so it moved to the Roy Miller farm in Jefferson in 1956. The 60th anniversary of the hillclimb in Jefferson is coming up.

3. Twice a year, motorcyclists climb the 300-foot Jefferson hill with the goal of hitting the top with the fastest times. (This photograph gives you a nice sense of the hill’s steepness.)

4. Two breakers or jumps add to the challenge of navigating the hill atop lightweight bikes powered by nitro-methane and/or nitrous oxide.

5. The Jefferson hill today is longer and higher than its natural state. Club members dug out the bottom of the hill and hauled the earth to the top.

6. The hill has a name. It’s known as the W. E. Bankert Memorial Hill after a club member who was killed while riding his motorcycle on the way to a club meeting. The accident happened when a car pulled out in front of him. The tragedy did not halt plans; in fact, climb went on. ‘The members and many of his friends were saddened, but they had the hill climb on June 3, 1956,’  the club’s website states.

7. The existence of the White Rose Motorcycle Club, the event sponsor, signals York County’s love affair with its wheels. The motorcycle club actually was founded before York County’s biggest wheels presence – the making of Harley-Davidsons in Springettsbury Township. The club traces its beginning to 1950. and the first Harley-Davidson rolled off the line in Springettsburg Township in 1973. 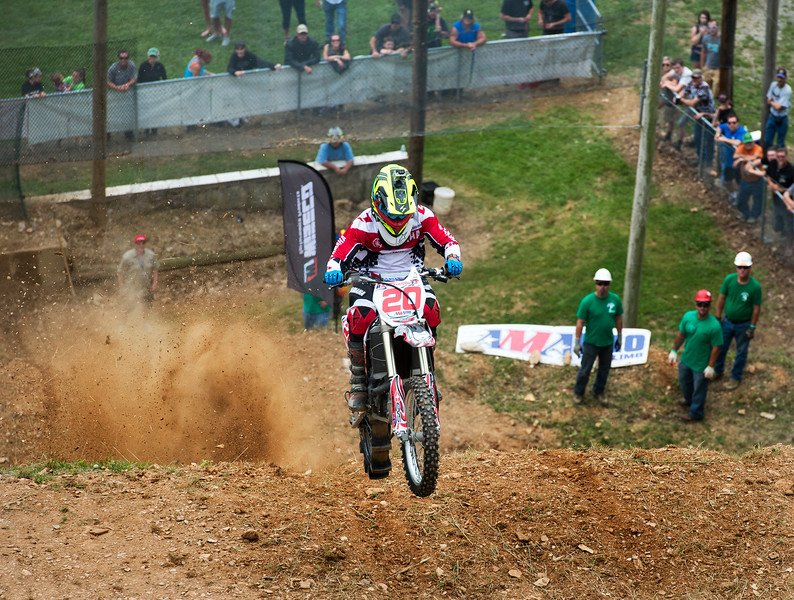 Paul Kuehnel captures a rider at the most recent climb – June 7. The next competition is set for Sept. 27.

*Facts about the hillclimb gleaned from the White Rose’s club’s website.