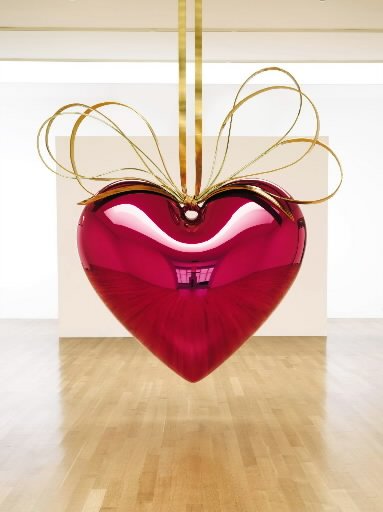 For a mostly rural region, the Dover area certainly has made the headlines for more than the landmark Dover intelligent design case.
It has produced many people of accomplishment.
NFL’er John Kuhn graduated from Dover High.
Dover High grad Scott Strausbaugh won an Olympic Gold Medal in whitewater canoe racing in 1992.
Dover-area’s Ray Krone was the 100th death row inmate freed from by DNA testing.
But artist Jeff Koons is Dover’s most internationally famous product of this largely rural area.
His sculpture recently brought in $23.6 million at Sotheby’s.
Jennifer Vogelsong’s York Daily Record/Sunday News story on Koons’ accomplishment follows:

A 3,500-pound Jeff Koons sculpture inspired by a glass-blown Christmas ornament sold for $23.6 million Wednesday at a Sotheby’s auction in New York City.
The private American investor who purchased “Hanging Heart” from Koons, a contemporary artist and a York County native, sold it to the Gagosian Gallery in a sale that set a record for the most money paid for a piece by a living artist. The previous record was held by Damien Hirst’s “Lullaby Spring,” a steel cabinet filled with 6,136 handmade painted pills, which sold for $19.5 million in June.
The 9-foot, stainless steel, magenta heart is part of the “Celebration” series of pieces that Koons and his hive of artists have been working on in his New York City studio since 1994.
“I think it’s wonderful that work by someone from this area, someone from my high school, has gained that level of recognition and value,” said Frank Dittenhafer, a partner at Murphy & Dittenhafer Architects. Dittenhafer has done architectural work for Koons at his family farm outside Red Lion.
Koons’ personal assistant, who answered the phone at the studio Friday, said Koons is very busy right now and does not comment on auction prices.
Kevin Lenkner, executive director of YorkArts, said he has received a lot of e-mails from people passing along the news of a local boy done good.
“What I think a lot of people don’t realize is that it just went from one investor to another,” he said. “The artist is way out of the situation by then.”
In January, YorkArts organized a bus trip to New York City to visit Koons’ studio.
Lenkner said he was impressed that Koons spent more than two hours talking with them and showing them around.
“He had pictures on his computers of the furniture store in York where his dad worked and the trolley that his grandpa used to drive from Prospect Street into York,” Lenkner recalled. “He’s acutely aware of his roots in York. I think as he gets older, the importance of that becomes more clear in his mind.”
After marrying for the second time in 2002 and fathering three boys, Koons purchased his maternal grandfather’s farm near Red Lion and has spent many weekends there restoring the houses, barns and grounds to look the way they did when he was young.
Lenkner said he has seen Koons at Central Market, having breakfast at Mezzogiorno. Lenkner said Koons also showed up at YorkArts’ “Chalk It Up” event at the West Manchester Mall in April with his wife and kids.
“There was nothing more surreal than seeing Jeff Koons at the West Manchester Mall,” Lenkner said. “It’s one of those things where a lot of people around here still don’t know who he is.”
Elsewhere, people not only know about Koons and his art but they also have plenty to say about it.
Pop-culture pieces Koons produced in the 1980s were said to be too kitschy. A series of erotic photographs of Koons and his ex-wife, Italian porn star and politician Ilona Staller, too racy.
In a Sotheby’s video about “Hanging Heart,” Lisa Dennison, executive vice president, described the piece as suspended “between this kind of childlike innocence, childhood pleasure and adult pleasure and eroticism or sexuality.”
Dittenhafer said he’d guess it’s more about elevating familiar and ordinary objects to extraordinary levels.
“His work is not abstract or disconnected from people’s memory. It’s something very recognizable and enjoyable and comforting,” he said. “I think people can react and interpret it in many ways, on multiple levels.”
‘Hanging Heart’· 9 feet tall
· 3,500 pounds
· Made from high chromium stainless steel with magenta coating
· Took more than 6,000 hours to produce
· Is part of Jeff Koons’ “Celebration” series
· Sold for a record-setting $23.6 million at a Sotheby’s auction
About Jeff Koons