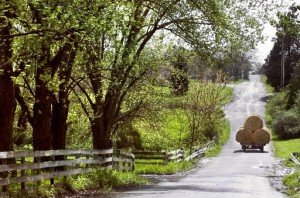 A slow-moving tractor tows bales of hay along Grandview Road in Jackson Township in 2007. The township has long been agricultural in nature. “The land of Jackson Township is fertile and productive, and its owners are industrious and prosperous,” historian George Prowell wrote in 1907. But the township’s location along the turnpike – later the Lincoln Highway and Route 30 – and the Western Maryland Railroad also meant it has played host to its share of industry. An Arm & Hammer plant is operates there. Background posts: Part of York County’s past goes on the auction block, York County railroading: ‘Something that gets in your blood’ and Old Lincoln Highway pulled ‘Americans out of the mud’.

Jackson Township, carved from Paradise Township in 1857, is home to a new Arm & Hammer laundry detergent plant and distribution center.
Though a longtime farming township with a productive limestone and red shale soil, its position along the former York-Gettysburg Turnpike and the presence of the Western Maryland Railroad meant that businesses have long been operated there… .

In 1907, historian George Prowell wrote about the 23-square-mile municipality: “Jackson Township, though not large, is quite thickly settled.”
In 1900, 1,596 people lived within its borders. Today, the population tops 6,000.
That year, the following industries were budding, according to Prowell:
– Thomasville was home to a large cigar factory employing 100 workers.
– Limestone quarries operated in the Thomasville area, forerunners of J.E. Baker operations in that area today.
– In earlier years, iron ore was mined in the Pidgeon Hills and shipped to furnaces elsewhere in York County and outside the region.
– The headwaters of the Little Conewago and tributaries of the Codorus Creek run through the township. This powered Biesecker Mill and other mills in the township.
The township has experienced a couple of noteworthy historical moments.
George Washington met a delegation from York in the village of Nashville and was escorted through the township to York in 1791, according to Prowell.
In the Civil War, the invading Confederates passed through the township, camping within its borders before marching into York in late June 1863.
The township was named after U.S. President Andrew Jackson.