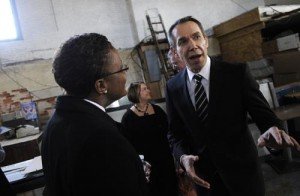 Jeff Koons and Kim Bracey meet before the mayor’s State of the City Address at Central Market in York. Koons, members of the rock band Live and playwright Dorothy King were honored with arts awards.  (Click to enlarge image. See additional photograph below.) Also of interest: Check out this list ready for induction in a York County Arts & Entertainment Hall of Fame – Pt. 1 and Hall of Fame, Part II and Hall of Fame, Part III.

Mayor Kim Bracey is doing all the right things in bringing in celebrities to promote her city.

Now it’s time to create a place – a hall of fame – to secure their memories. Maybe with Koons artwork at its center?

We’ve been tracking York County’s achievers – its celebrities – for years on this blog. Part of idea is that these folks will make the history books – or history blog sites – 100 years from now. And part of the idea is that bringing back these celebrities draws attention to the city/county and its achievements. These celebs can help raise funds – and community morale.

The mayor is striking the right note in all of this, even using Central Market as an assembly hall for her State of the City event, bringing back of common use from 100 years ago. (Now we need to make the market’s food court a third place, a gathering place in the evenings in the mold of Starbucks or BAM.)

Other random observations about the evening:

– It was great that  Dorothy King received due recognition. She is one of the achievers who grew up in the 300 block of West Princess Street neighborhood 50 years ago.

– Live band members brought up the name of the Magnificent Men, a 1960s band with William Penn High School roots.

– The mayor referenced Charles Dickens, who visited York in the 1840s during an American tour. That was a good play on bringing our past into the present.

Now, we need a place to capture these people of accomplishment and their achievements. 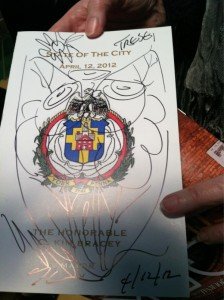 A fan received this Jeff Koons’ artwork on her programs. Wonder about the value of this keepsake in 50 years?