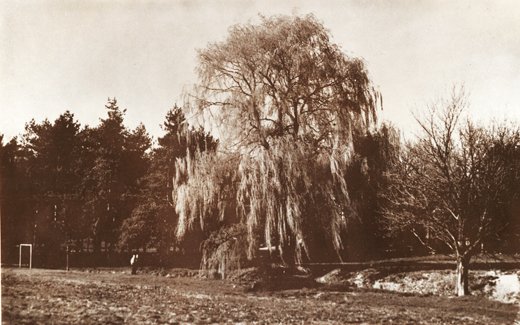 This stately willow tree was featured in The Gazette and Daily’s calendar in 1969. The caption for the May entry stated: ‘If April comes and the willows turn from yellow to green, can spring be far away? This sylvan setting actually is just outside York, along Powder Mill road in York township.’ Question for readers: Is this willow tree stand today, 43 years later? Also of interest: Emigsville’s landmark oak fell in 1997.

We received several interesting insights into preservation in response to a recent Facebook question relating to the post: What stood for 142 years came down in hours.

Here are a couple comments and my response:

Linda Chenoweth Harlow: ‘ To stop such destruction we need to stop thinking that newer or more modern is “better”. It also takes money and lots of it. Often things are in such disrepair due to neglect that the cost of bringing them back to their former glory is just too expensive. Even properties on the National Historic Trust are in danger of demolition. We need to find ways to repurpose older properties.’

Josh Dutt: About the Springdale Mansion –  ‘that once stood on the corner of Market and Richland, where an Exxon now sits? I once found a picture of this place online, I’ll try to relocate it, the home was beautiful. Now, only the Carrige House sits, giving us an idea of the once beautiful home that once stood.’

Where are your yearbooks? The York County Heritage Trust is looking for a few good yearbooks. Check out this yorkcountyheritagetrust blog post for an explanation.

While you’re at it, check out your Bible: ‘Have an old Bible…wondering about its history?’ the Heritage Trust is asking. ‘Bring it to Family Bible Day at the Historical Society Museum on Sun., May 6, 1-4 pm.’

Working on the railroad: A ydr.com story updates the controversy over ownership of the Stewartstown Railroad.

Catch this update? New market master Terry Downs tells about plans for the venerable  Farmers Market, one of two covered markethouses still operating in the city.

Forum of the day: Exchangers are discussing: The greatness of Ike. Everyone know who Ike is; he was ahead of Cher, Bono and others in gaining one name that everybody knows.