Is that Pidgeon or Pigeon Hills in western York County? 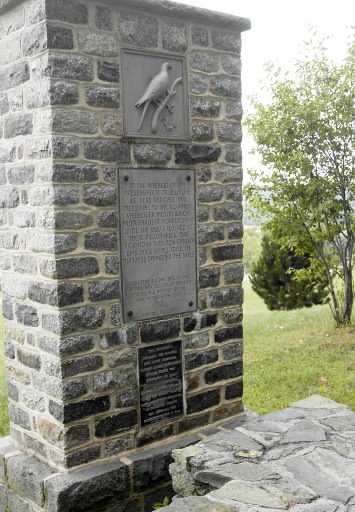 The passenger pigeon monument at Codorus State Park, standing on a hill off Marina Road, was rededicated 25 years ago after the move from its original site in the hills north of Hanover. Background posts about a York County pigeons of different types: World War II homing pigeons served far from home and York’s racing pigeons: ‘This is like the Kentucky Derby’.

Some sources say those hills north of Hanover are the Pidgeon Hills. Others say they’re the Pigeon Hills.
It’s a difficult controversy to resolve.
Some believe those hills are named after the Pigeon family. Others back the Penn’s surveyor of Paradise Township, Joseph Pidgeon.
The controversy is stoked by the fact that now-extinct passenger pigeons populated the area in the late 1880s. Indeed, there’s even a monument at Codorus State Park to recognize their ubiquity in these parts… .

An early source for the use of Pidgeon is Gibson’s history of York County (1886), which states unequivocally: “Pidgeon Hills were named after Joseph Pidgeon, an English surveyor from Philadelphia County, who assisted in laying off the first townships in York County.”
In fact, the current road to Abbottstown from Hanover – Broadway – was originally called Pidgeon Street because it led to the so-named hills.
The Gazetteer of York and Adams Counties endorses Pigeon Hills and does not even have an entry for “Pidgeon.”
This could be one of those quirks from history where both are true: The hills were originally named Pidgeon, and because of the prevalence of pigeons there, the spelling gradually changed.
Anyway, a York Sunday News story from Sept. 16 on those famous passenger pigeons follows:

For many city dwellers, pigeons are considered a nuisance and a pest.
But the extinct passenger pigeon, which flocked in great numbers north of Hanover, is a source of wonder to many in the area, and the bird even has its own monument.
The 25th anniversary of the monument’s rededication at Codorus State Park was Wednesday. It was once located in the Pigeon Hills north of Hanover, but was nearly destroyed by vandals after its original dedication in 1947.
Many believe the Pigeon Hills were named after the passenger pigeon, which visited the region, but according to Bill Klein, the chairman of the monument rededication committee 25 years ago, the region is named after the Pigeon family, who started developing the hills north of Hanover.
Even though the last-recorded visit of the passenger pigeon to the Hanover area was in 1881, a group of Hanover residents led by William Anthony, a printer and publisher of historical articles, decided to put up the monument in memory of the passenger pigeon, which became extinct in 1914 when the last-known bird died at the Cincinnati Zoo.
According to Klein, the monument was created to honor the bird but also warn people about man’s effect on nature. It is widely believed that the bird was hunted into extinction.
The inscription on the monument reflects the need for conservation and preservation.
It reads: “In the interest of the preservation of wildlife we here dedicate this memorial to the ill-fated passenger pigeon which from earliest pioneer days until the 1880s flocked to these Pigeon Hills. This migratory bird now extinct was once so plentiful its numbers darkened the skies.”
The monument’s original location was off the beaten track in Reservoir Park near the former Hanover Municipal Water Works and, because of this, it often was found vandalized, Klein said. The borough kept up with the cleaning and resurfacing work until the monument was toppled over.
The Hanover-Adams County area’s Blue and Gray District Boy Scouts became interested in preserving the monument, and sold keychains and held other fundraisers to help raise money for the monument, Klein said. The Scouts raised $3,300.
The monument is now on Marina Road at the park, on the crest of a hill on the right heading toward the docks.
Klein said he couldn’t be happier with the location and hoped that people would visit it and be reminded of the need for conservation.
“It was a real big thing,” he said of the rededication 25 years ago, “and I want it to come alive to the community.”

For a post on a bird of a different stripe, see: Birds gone, steeple stands.
And for a famous York County musician with links for Pidgeon, er Pigeons Hills, see: Don’t forget Del McCoury on list of York County’s celebs.