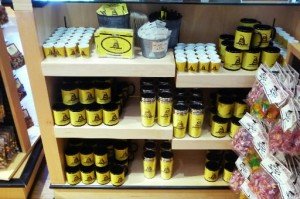 The Gadsden flag appears on several items for sale at the Gettysburg Visitors Center. A visitor has questioned why such a political symbol, associated today with tea party groups, would be permitted at Gettysburg National Military Park. The symbol was used in Civil War times, too, officials say. So, we have an interesting conflict in Gettysburg. Also of interest: Those John Wilkes Booth bobbleheads in Gettysburg? Manhunt ends.

Heat involving the sale of bobblehead dolls of John Wilkes Booth at the Visitors Center in Gettysburg has cooled but a controversy over another symbol is growing.

“The name might not be recognizable,” a Hanover Evening Sun story states, “but you’ve probably seen a Gadsden flag, typically yellow with a coiled rattlesnake and the warning ‘Don’t tread on me.'”

“The flag was flown by colonists rebelling against British rule. And more recently, it’s become the adopted symbol of the Tea parties and conservative Republicans, prompting questions as to whether it’s an appropriate theme for merchandise sold at the Gettysburg battlefield bookstore.

“There shoppers will find Gadsden flag shot glasses, mugs, magnets and pins. The souvenirs are the only items representing the Revolutionary War sold in the bookstore, said an employee.”

Gettysburg Foundation officials says the symbol was in play among secessionists in the Civil War.

And a park service spokesman said: “The Gadsden flag, to us, is a piece of history. At these Civil War sites, we don’t try to just have Civil War history. But we try to pique people’s interest in history throughout the nation.” Read more: At Gettysburg, history or propaganda?

I think those disagreeing with the Gadsden symbol are involved in an enterprise akin to a Civil War soldier picking lice from his wool uniform. It’s an endless job. The whole Civil War was political.

Bury’s burgers: Someone gave this apt description on Facebook about Bury’s burgers she whipped up using the published recipe in this post: Reader reveals Bury’s secret recipe. “We think they are like an un-sloppy joe!” she wrote. They have about the same flavor and much easier to eat.

Ice cream man: Ah, remember the man who drove the ice cream truck. Rather, what he served? Meet one such modern-day ice cream man rolling along the streets of Winterstown. Ice cream should never melt in Winterstown.

Forum of the day: Some of the Books that Shaped America will be at today’s York Hospital Auxiliary’s Book Nook, that annual massive book sale: http://bit.ly/MQ6Q0T. Plan to go? How does the Book Nook rank among the area’s used books sales? Comment below. 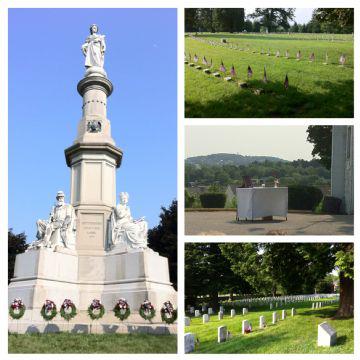 Blog post of the day: Buffy’s World tells about an upcoming always popular photo contest: Show off your patriotic spirit for chance to win tickets to Hersheypark.