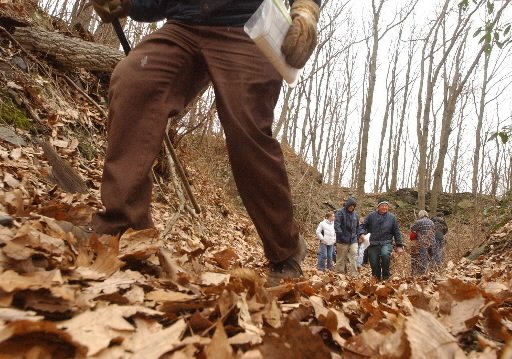 Hikers explore the area around the former York Iron Co. Mine in North Codorus Township, now P. Joseph Raab County Park. Guides give occasional tours of this newest county park. One of the guides, Jeri Jones, has published a book on regional geology. (See below). Background posts: What was that Eastern York County pit before it filled with water? and Eighteenth-century brownfield now parkland

Some people attach mining to the soft coal regional of western Pennsylvania or the anthracite area of northeastern Pennsylvania.
It’s easy to overlook York County’s mines. No piles of slag dominate local towns.
But the county has seen slate mining in its southeastern region. Active limestone mining – dolomite for fire bricks – spans areas of West Manchester. Quarrying for rock to build houses or to form road foundations has taken bites out of mountainsides.
And the excavation of iron ore was one of the most prevalent forms of mining, largely in the 19th-century. 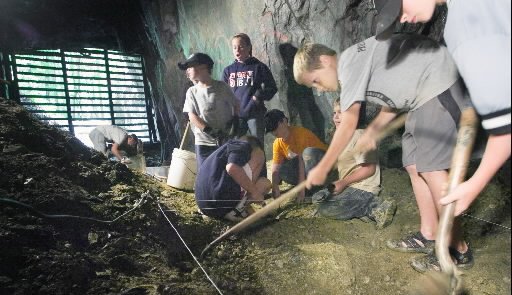 A dig inside a mine at P. Joseph Raab Park

The ore dug from pits or drawn from underground mines supplied furnaces around York County and in neighboring areas. Margaretta, near East Prospect; Codorus, near the point where the Codurus Creek empties into the Susquehanna River; York Furnace, near present-day Holtwood Dam; and Mary Ann Furnace, near Codorus State Park; provide a sampling of local furnaces. (Codorus Furnace stands today.)
Over the years, the ore pits have filled in with water and can pass as ponds.
The former York Iron Co. mines in North Codorus were known to locals for years as playgrounds.
Now, the mines are preserved as part of P. Joseph Raab County Park, as the following story from the York Daily Record/Sunday News indicates:

A lot of changes have come to the land of the former York Iron Co. Mine in North Codorus Township over the past 150 years.
It has gone from a site that produced some of the best iron ore in the area, to a landfill, to a spot where local children and teens played, and finally to a county park.
Saturday, about 50 people took a guided tour of the land, which is now P. Joseph Raab County Park. Jeri Jones, a geologist and county park employee, led the group.
Not much history has been written about the iron company, Jones told the group before they started off.
What is known is that the land was mined, by workers using mostly hand tools, from 1854 to 1888. In its boom, some of the best ore in the area was extracted from the mine and was called “Codorus Ore.”
Jones said the mine employed mostly immigrants from England and Wales who probably worked 10-hour days, six days a week.
The average wage each received around the 1860s was 25 cents a week.
On a recent archaeological dig of a hoist house that was used to ferry men down a currently closed mineshaft thought to drop 100 feet into the earth, an 1868 nickel was found. It might have been a miner’s daily wage.
“I doubt his wife was happy that he dropped this,” Jones said.
After the mine closed, due to the discovery of better ore deposits in the Midwest, the land sat vacant. Part of it became a landfill, and the mines and the surrounding area became a hot spot for local kids to explore.
Adam Manning of Codorus Township said he grew up near the mine and recalled it being a “big playground” when he was a kid.
Manning said he and his friends would venture into the mines out of curiosity and would climb up and rappel down the 70-foot quarry wall.
“The freedom we had before it was a park was amazing,” Manning said.
Manning said as he hit his late teens, he and friends would bring in tents and coolers and camp out for the weekend on the giant piles of excavated rock.
The mine site was dubbed a party spot, but Manning said it was more than that to him.
“We just enjoyed being out here; we never got into anything too terrible,” he said. “I was just happy being in a hole in the ground.”
BAT COUNTRY
P. Joseph Raab County Park in North Codorus Township was once home to the York Iron Co. Mine.
But now it is home to 130 bats who live in the abandoned mines, said Jeri Jones, a county park employee. Some of the mines have metal “bat gates” guarding the entrances. The slotted gates are to keep out curious adventure-seekers but still provide bats with a way to enter and exit the mines.
SIGNING
Local author Jeri Jones will sign copies of his book, “TimeWalk — A Journey through Time in Adams, Lancaster and York Counties, Pennsylvania,” from 3 to 6 p.m. April 11 at Borders in Springettsbury Township.
To learn more about the author, visit www.jonesgeo.com
Copies of his book are also available at the York County Heritage Trust book store, Gettysburg Christian Bookstore and by contacting Jones at JLJ276@aol.com