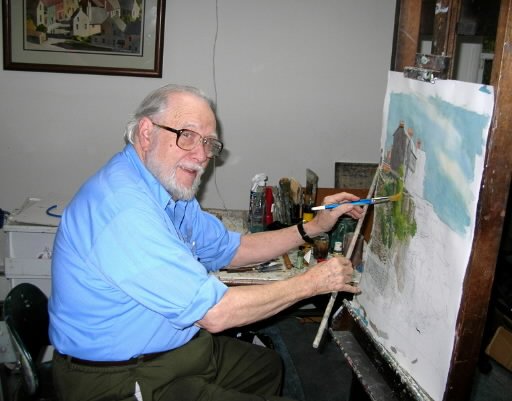 This photo of William A. Falkler was published in connection with a retrospective exhibit at York, Pa.’s, Bradley Academy in 2005. ‘Just because it’s a retrospective doesn’t mean the artist isn’t still creating fresh work,’ the caption stated. It quoted the York County, Pa., artist, then 79, saying,  ‘I’ll paint until I die. It’s part of my life.’ Also of interest: Check out this drawing by Cliff Sattersthwaite of William Falkler conducting an art auction.

“A few years ago I made a trip to York County, PA to specifically attend an auction by the William Falkler family. My intent was to successfully bid on Falkler prints and originals. I was always fascinated by Falkler’s skill and ability to capture Historic ‘Yesteryear’ of York and surrounding areas, a reminder of better days gone by and a connection to my York roots.

“I was successful in bids on 7 prints and one original that are prominently displayed in my home.

“Two questions: Are Falkler prints available for purchase and if so, where, and by whom? & Is there a gallery of museum in York where all of William Falkler’s works can be viewed?”

Can anyone give a good answer to this query?

You know you’ve reached success in the art world when people refer to your paintings prefaced with an “a.” William Falker has earned that status. Now and then, you’ll hear: “Is that a Falkler?” or “That’s a Falkler.”