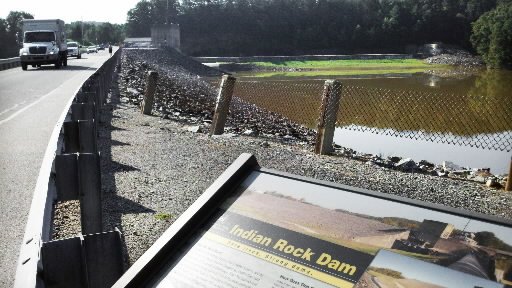 Indian Rock Dam is hard at work in September 2011. The lake at the right is normally a peaceful creek, Codorus Creek. The dam might be put to good use this week with Tropical Storm Sandy bearing down on its watershed. To monitor reservoir levels, check out Advanced Hydrologic Prediction Service. Also of interest: York County weather forecasts before, during and after Tropical Storm Agnes’ wrath.

Blake Stough, over at PreservingYork.com and an associated Facebook post, has cast a well-deserved spotlight Indian Rock Dam.

He leads the Preserving York Facebook post with: “The City of York should celebrate the birthday of it’s protector… . Indian Rock Dam has quietly kept the Codorus Creek at bay for 70 years, and continues to stand strong.”

And many people have commented on that post about the dam, which opened in September 1942.

The Indian Rock Dam project was part of Codorus Creek channel improvements that not only helped guard against the likes of flooding as hit York in 1933 but also provided Depression-era jobs.

It always struck me as interesting that Indian Rock Dam work was going on during the early stages of World War II. Those workers no longer were needing the jobs. They were needed in the military and in local factories.

Another point that has long interested me about the dam: Why didn’t Indian Rock Dam do more to prevent the damage and deaths linked to Tropical Storm Agnes in 1972?

Blake’s PreservingYork.com post leads us to a Corps of Engineers website (check it out, it gives the dam’s dimensions) that explains the impoundment was only at 61.7 capacity in that late-June storm. So obviously when you have 16 inches of rain pummeling a community, the creek is going to load up from other tributaries.

Forum of the day: Tropical Storm Agnes dumped a foot and a third of rain on York County in 1972. OK, you’ve read about and seen the forecasts: What do you predict out of Sandy? Please comment below. 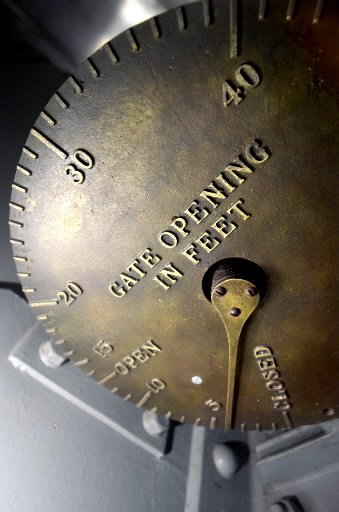