In York, Pa., it was a musical night in honor of Martin Luther King Jr. 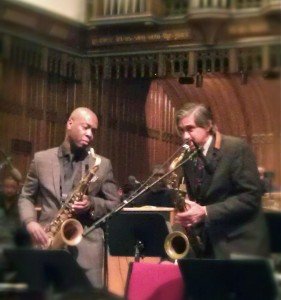 Every year, First Presbyterian holds Jazz Vespers honoring MLK Jr. And every year, the musical moment that brings people to their feet without fail is a duel of sorts between saxophonists Tim Warfield and Chris Bacas.

The pair face off in a friendly quest for who can reach the highest note or say the most profound jazz prayer or both.

But that’s not the only piece of the event that is memorable:

1. The mixed race audience is on the receiving end of a jazz concert by a mixed race band, still unusual enough in York County churches to note. Jeff Stabley led the group, that accompanied a black choir, the Bible Tabernacle Voices for Christ. Whatever happened the next morning – reportedly the most segregated time in America – this annual service at First Pres is a time of coming together.

2. This event kicked off a year-long series commemorating the 250th anniversary of First Presbyterian Church. (See schedule below.) The church reports that Presbyterians worshipped in homes in York as early at 1755, and the first church went up seven years later. The current Civil War-era building is the second built on this site.

3. The biography in the vespers’ program for band member Steve Meashey is unforgettable: “Words are pointless filled with half truth, as are bios. Just listen with your heart, mind and soul. It doesn’t matter where I’ve played or what and with whom I’ve played.”

“Set aside all opinions and just listen.”

Well, here’s one opinion that we won’t set aside: Dr. King’s memory was superbly honored at First Pres.